Breaking News
Home / Blogs / In, Out, shake it all about

In, Out, shake it all about

Two years ago, if you’d said anything about the UK’s possible performance in the 2019 European Elections, many people would have scoffed at you. The Government had triggered Article 50 and kick-started the process of the UK divorcing from the EU. The deadline had been set for March 29 2019. Obviously the UK wouldn’t be taking part in the elections.

Fast-forward to this weekend and the two major UK parties have been royally routed (again – see earlier blog on the local council elections) in the elections that no-one expected to have to hold. In fact, had Teresa May’s Brexit Withdrawal Bill not been rejected yet again at the last minute, they probably wouldn’t have been held, at least not in the UK. But the deal was blocked and the elections went ahead. So unprepared were the Electoral Commission and local councils for these elections that tens of thousands of EU citizens who are resident in the UK were unable to vote. Likewise, thousands of ex-pat Brits living in EU countries found they were lacking the right paperwork.

The Electoral Commission says if an EU citizen wanted to vote in Britain rather than their home state, they had to transfer their right to do so 12 days ahead of the poll. It is blaming, of course, the government and issued a statement to that effect: “The very short notice from the government of the UK’s participation in these elections impacted on the time available for awareness of this process amongst citizens, and for citizens to complete the process”. (Mind you, some councils, mine included, were fab and went into overdrive as soon as there was a hint in the press of any potential problems).

In the meantime, Nigel Farage is claiming that the performance of his Brexit Party (a sort of UKIP-lite, for those who just want to get on with Brexit but who don’t want anything to do with the nastier, more bonkers end of UKIP) means he would be Prime Minister should we hold a general election in October. Of course, a look at the actual polling numbers and the collapse of the UKIP vote shows that the Brexit Party has just taken most of the former UKIPers and added a sprinkling of disillusioned Tories and Labour voters and, hey presto, has done rather well.

As, of course have the Lib Dems and the Greens. Indeed, in most places if you take the votes polled for all the most vociferously Remain parties (Lib Dems, Greens and er, Change UK), together you find that they got more votes than any of the others. But then you can always use statistics to give you any answer you want, provided you know how to manipulate them.

Politics in this country is in a mess; May’s tearful exit means by the Autumn we’ll be on our third Prime Minister since the referendum and the groundswell against the shilly-shallying of Jeremy Corbyn surely means that he can’t be far behind her. Sir Vince Cable may be saying that this latest set of elections proves the resurgence of his party but they still don’t have the critical mass to be anything other than a coalition partner.

I rather suspect that too many of the Tory leadership contenders have nailed their colours to the out-by-October mast for us not to be leaving then, but even so, it will take a while for the true nature of the post-Brexit mess to be revealed. If, indeed, there actually is any. I’m so confused by it all now; who knows what may or may not happen.

All we can do is what this industry has proven rather good at – quietly getting on with things, while keeping an eye on the need for a Plan B, C or even D.

As usual, Matt Pritchett MBE in the Telegraph has the best, final words on any of this: 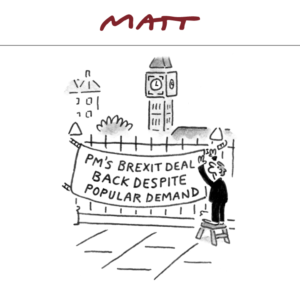 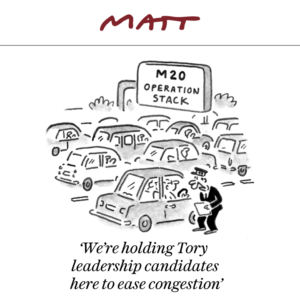