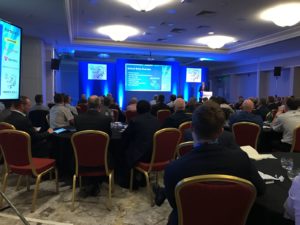 The forum, which was held at the Forest of Arden Hotel in Meriden, gave attendees the opportunity to hear about the latest innovations from the UK’s leading brick manufacturer, including design, technical, customer service and marketing support, as well as hearing about new products in the range.

Ibstock Brick also outlined how it is helping to ensure continued availability of brick as attendees were given an exclusive glimpse of Ibstock’s new brickworks; the result of a £54 million investment by the manufacturer. The state-of-the-art site, which is set for its official launch later this month, is set to bring an additional 100 million bricks to the market every year (enough to build 15,000 houses) and will play a crucial role in ensuring merchants and their customers have the bricks they need, when they need them.

In addition to a Speakers Corner and Question and Answer sessions, for the first time, the IBMF incorporated the Ibstock Hub. This provided attendees with an interactive format that allowed them to spend time in areas which were most relevant to them. As part of this, two of Ibstock plc’s other operating companies, Supreme Concrete and Forticrete, showcased their range of products, with Ibstock Kevington’s range of special bricks also on display. Attendees could also talk to design and specification specialists who were on hand to offer advice.

The IBMF also sought to raise money for a worthy cause, with this year’s chosen charity being Prostate Cancer UK. In total, £5350 was raised.

Tony France, Sales Director at Ibstock Brick, commented; “The IBMF provides a platform for us to understand the needs of our builders’ merchant customers, while raising awareness of the sales support and technical expertise we offer. It’s also an ideal time for them to come together and share their experiences and plans for the future.”

Simon Taylor, Director of Sales – Builders Merchants at Ibstock Brick, commented: “It was great to see so many people attending the forum, including many people who joined us for the first time. Our continued success is largely thanks to our builder’s merchant customers. Therefore, it is vital that we work with them and continually invest to deliver the products, services and solutions they need to succeed.”

Wrapping up the day’s activities with a keynote speech, Ibstock Brick’s CEO Joe Hudson commented: “It is incredible that the forum has been running for 21 years – it continued success highlights the value it has to our customers. Events like this are really important for us as a company – it is a great way for us to engage with the market and gain valuable feedback. This in turn helps us improve the service we offer, and as we look to the future this will be a continued focus for Ibstock.”

I'm the Assistant Editor on BMJ. If you have any product or people information, or some news you'd like to share, please feel free to email me.
Previous Flexseal extends Icon Pushfit to connect 6-inch pipes
Next Construction SMEs expect new technologies to deliver future business success