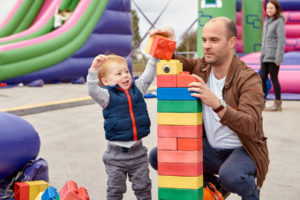 Ibstock Brick welcomed more than 400 members of the local community over the weekend to celebrate the opening of its new Eclipse factory in Ibstock.

The Eclipse factory was formally opened by the Secretary of State for Housing, Communities and Local Government, The Rt Hon James Brokenshire MP, in June. The leading brickmaker hosted the event on Saturday 22 September, to thank the local community and their employees for their support of the project over the last three years. Employees, local residents, community groups and schools attended to get a firsthand look of the facility.

Ibstock Brick currently produces more than 800 million bricks a year at 21 factories across the UK. Eclipse will more than double brick production at its Leicestershire headquarters to 190 million soft mud bricks a year.

There were plenty of activities on offer for families to enjoy. As well as taking a tour of the factory, visitors participated in brick making, a football shoot-out, a test of strength, face painters and traditional fair games.

Joe Hudson, Chief Executive of Ibstock, says the open day was an opportunity to include the local community in its achievements.

He commented: “Ibstock has participated in the life of the local communities in which we operate for generations. As an organisation we are extremely mindful about the impact our operations have on the communities around us. We are extremely proud of Eclipse and welcomed the opportunity to showcase it to people living in the local area. This is not only British manufacturing at its best; our investment is also bringing significant benefits to the local economy in terms of employment, opportunity and skills. It was fantastic to see so many local people taking an interest in what we do here at our Leicestershire site.”

Darren Bowkett, Operations Director at Ibstock Brick, commented: “Over the last three years, we having been building Eclipse, one of the largest and most efficient brick factories in Europe, right here in Ibstock. We wouldn’t have been able to achieve this without the support of our employees and the surrounding community. We understand the importance of building strong relationships with those around us, and hopefully this event showcased what we do here and its importance for the whole area. We received a lot of positive comments and it was clear our visitors enjoyed their day.”

Ibstock Brick’s investment in the new brickworks is a statement of its commitment to support the Government’s ambition to deliver 1million homes by 2020. The factory also takes 21st century British manufacturing excellence to a new level. Located on an old landfill site and close to its principal source of raw materials, it covers an area the size of six football pitches. State of the art robotic technology ensures precision and efficiency, whilst innovative building design concepts and sensitive landscaping will reduce the company’s environmental impact and demand on natural resources.

I'm the Assistant Editor on BMJ. If you have any product or people information, or some news you'd like to share, please feel free to email me.
Previous Brochures turn the spotlight on new Vista products
Next Impey Launches Revolutionary Shower Space Configurator