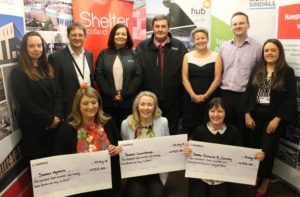 Supported by its Tier 1 Contractors Graham’s, Kier Construction, Morrison Construction and Morgan Sindall, hub South West welcomed over 100 attendees to the fundraiser which saw 22 teams compete in a Texas scramble style golf event and for some fantastic raffle and auction prizes donated by contractors and by members of hub South Wests’ wider supply chain and professional service providers.

Shelter Scotland provides advice and practical support to thousands of people each year who are struggling with homelessness or who are at risk of homelessness and campaign to prevent it in the first place. The £14,171 was presented to representatives from Shelter Scotland’s services and charity shops from Lanarkshire, Ayrshire and Dumfries and Galloway on 22nd August 2018.

Graeme Brown Director of Shelter Scotland said: “This is a tremendous donation from hub South West through its Summer Charity Golf Event. Shelter Scotland relies on the support of members of the community so we can continue to offer help and advice which means no-one has to face homelessness or bad housing alone.

“We’d like to thank everyone involved for their generosity.”

CEO of hub South West, Michael McBrearty, said: “The event was a great success and we are hugely gratified by the number of companies who took part to raise a fantastic sum for a worthy cause.

“Shelter Scotland is a wonderful organisation which is marking its 50th anniversary this year. They offer invaluable support and services to vulnerable families and individuals in communities across Scotland and we are so pleased to be able to present them with this donation.”

I'm the Assistant Editor on BMJ. If you have any product or people information, or some news you'd like to share, please feel free to email me.
Previous Worcester unveils first augmented reality app for installers
Next Domus launches new website – Domusgroup.com