The award recognises talented individuals in the timber and merchanting sector who have been proactive in developing their skill set and applying this positively in their roles. As well as demonstrating Ford’s determination, his achievement of the TTJ Career Development Award is evidence of Howarth Timber’s ongoing commitment to ensuring its staff are highly knowledgeable about the industry.

Prior to receiving the award, Ford gained a Distinction in his Diploma in Merchanting from the Builders Merchants Foundation (BMF), 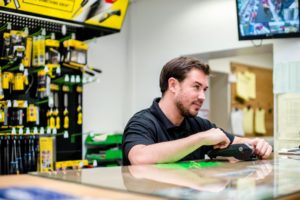 which was crucial to his recent promotion to branch manager. One of the first people in the country to receive this diploma, he has been proactive in his development since he started working in the industry a decade ago.

After actively engaging in a number of internal training initiatives, Ford was noticed by Howarth Timber’s internal training co-ordinator as demonstrating exceptional personal and professional growth – contributing to his promotion to branch manager.

In his role as branch manager, not only has he set out a plan for his own further development, but he is a strong advocate for the entire London Brockley branch staff’s career development; resulting in high levels of team engagement and enthusiasm.

Howarth Timber’s group HR manager, Anadi Dey, said: “As a business one of our core objectives is to support staff in their development and maintain a highly knowledgeable workforce, so we’re incredibly proud of the commitment Aron has shown throughout his career to his own professional development, from taking part in internal training to being one of the first people in the country to receive a Diploma in Merchanting.

“Aron’s receipt of the TTJ Career Development Award is very well deserved and it’s great to see that it’s inspired him to advocate internal training in his branch. We’re looking forward to watching Aron’s career continue to develop in the future.”

I'm the Assistant Editor on BMJ. If you have any product or people information, or some news you'd like to share, please feel free to email me.
Previous Flame spreads to Boldon
Next Williamson paves the way to Digby Trading