Tom Tugendhat, MP for Tonbridge and Malling, performed the opening itself on 14 September, with the Secretary of State for Housing, Local Government and Communities James Brokenshire also visiting the plant during the day to see the new production facility. 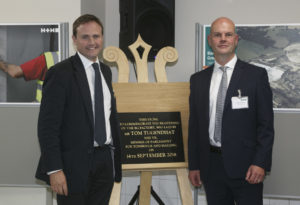 The rebuilding of the factory means the 30-year-old plant is now the most technically advanced and efficient aircrete plant in Europe.  When running at capacity, the plant produces around 20% more volume – enough to build an additional 5,000 houses per year.

Blocks produced at Borough Green are manufactured from Pulverised Fuel Ash (PFA) but given the changes in power generation in the UK it was considered prudent to design the new plant so that increased quantities of sand can be used as and when PFA becomes more difficult to obtain. 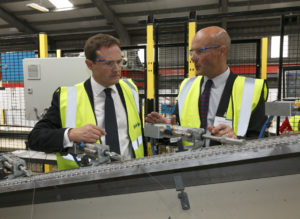 H+H UK Managing Director, Calum Forsyth paid tribute to the teamwork involved in the project, recognising the major contribution of equipment manufacturer Wehrhahn and of project managers VA Consulting.  However, he was keen to point out that: “Collaborative working is often the best solution, but the involvement of outside experts in no way diminishes the exceptional work of our own Borough Green team. The commitment and determination to complete this project was beyond extraordinary.”

Kent Arentoft, Chairman of H+H International added his own thanks to the Borough Green team, emphasizing also the significance of this investment, and the importance of the UK market, to the H+H Group as a whole.

This theme was expanded further by H+H International CEO Michael Anderson who gave more detail on the expansion plans for the Group, referencing recent acquisitions in Poland and Germany and touching on an ongoing programme of investment in the portfolio of factories throughout Europe, including an additional UK project involving H+H UK’s Pollington factory.

PHG, the plumbing, heating and bathroom buying group for the UK hosted the PHG Supplier …