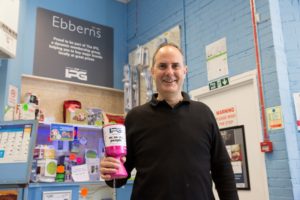 Hertfordshire-based Ebberns Ltd, a plumbing, heating and bathroom merchant and proud member of The IPG, is celebrating a strong 35 years in business.

The company was first established as a plumbing and heating trade counter in 1983 by Chris Garroway and it was originally based in Ebberns Road. The trade counter is still going strong alongside the bathroom showroom that opened in 1991 in Frogmore Road, where they are now based. Ebberns have since opened two new showrooms, one for kitchens and one specifically for tiles.

However, it is the longevity of its staff that Ebberns are most proud of. First starting with only 2 employees, this has grown to 27, with the majority being on the Ebberns team for over 15 years. One staff member, General Manager Kevin Leyman, has been working for the business since the very start.

Leyman said; “It has been wonderful to see the company grow, develop and adapt over all these years. I think the success stems from the commitment and experience of the staff. We like to say our unique selling point is that we are big enough to cope, but small enough to care.”

Tony Barber joined 27 years ago as a member of staff, and stepped into the Director’s role in 2005. When discussing how Ebberns has kept going from strength to strength during the internet age, he commented; “We’re passionate about what we do, and that to us is creating the bathrooms of people dreams. Our trade counter is staffed by highly experienced and friendly people that have exceptional product knowledge, which means our customers come back time after time again.

“We’re different from the internet as we ensure our customers have a reachable point of contact when they have problems, which is inevitable when dealing with gas, water and electricity. Many of our staff have worked as tradespeople in the past, so they know exactly how to resolve any issue.”

Ebberns is also a member of The IPG, a leading buying and marketing group for independent plumbing, heating and bathroom specialists across the country. Nike Lovell, The IPG’s Marketing Manager, said; “It’s always great to see one of our members celebrate a milestone such as this. It shows that the passion Ebberns’ employees have for their industry and their customers hasn’t gone unrewarded. We look forward to continuing working with Ebberns in the many years to come.”

Ebberns also gives back to the community through a number of charities they support. Most recently, Ebberns signed up to The IPG’s new partnership with national charity Missing People. This will see Ebberns raise awareness of local missing children, in the hope that its customers can become extra eyes and ears in the vital search.

As part of the 35th anniversary celebrations, Ebberns are running a bathroom sale of up to 60% off until 17th November. Visit the trade counter and bathroom showroom on 1A Frogmore Road, Hemel Hempstead, HP3 9RW for more information. Alternatively visit their website at https://www.ebberns.co.uk/

I'm the Assistant Editor on BMJ. If you have any product or people information, or some news you'd like to share, please feel free to email me.
Previous BWF Comment on the Autumn Budget
Next The first graduates of H&B’s Development Group