Fire tests from as early as 2014, showed cladding used on Grenfell Tower failed to meet the safety standards, a BBC investigation has found.

The cladding used on Grenfell was Reynobond PE, aluminium panels containing a plastic filling, that were popular in cost-conscious council refurbishment schemes. 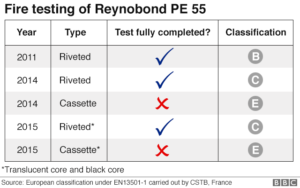 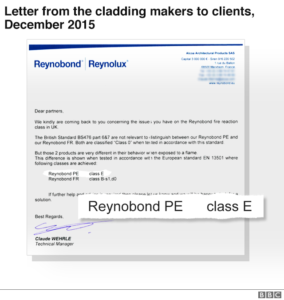 While zinc cladding was initially considered when the tower was refurbished in 2015, Reynobond PE was a cheaper option, saving nearly £300,000.

The firm Arconic knew the test rating had been downgraded, but the UK body that certifies building products said it was not told about the change. An industry source, who has worked on a number of cladding schemes, said he believed there should have been a product recall.

Arconic said it did share the rating with “various customers and certification authorities”.

It said the results were also published on the website of the French facility that carried out the tests in 2014 and 2015:

In the standard European tests for “reaction to fire”, products are rated A to F – with A being the top rating. Reynobond PE had a certificate based on a rating of B.

Some regarded this to be the required standard for use on buildings over 18m in height, though the government says it should have been A rated. The rating was issued in 2008 by the British Board of Agrément (BBA), which used technical data provided by the manufacturer to assess the standard of the panels.

However, the BBC has uncovered a series of reports commissioned by the manufacturer in 2014 and 2015, during the planning for the Grenfell refurbishment.

Two configurations of the cladding, both later to be fitted at Grenfell, were tested.

One, known as “riveted”, was given a classification of C, not B as was stated on the certificate. The “cassette system”, where the panels are formed into shapes before being fitted, was classified as E. In this case, the reports suggest the testing process was not completed.

However, the BBC also obtained Arconic correspondence sent to clients from late 2015 in which the company appears to confirm some of the panels were rated class E.

The email specifically addresses “concerns about the product’s fire reaction class in the UK”.

I'm the Assistant Editor on BMJ. If you have any product or people information, or some news you'd like to share, please feel free to email me.
Previous Toolbank driver retires after 39 years and almost 2million miles
Next H&B announce formal launch of the TBG Development Group