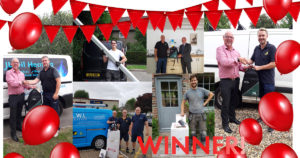 Grant UK’s largest ever installer promotion launched in July and over a thousand prizes have already been sent out to G1 Installers. With so many winners in the first two months of the ‘Big G1 Giveaway’, Grant UK is looking forward to sending out many more prizes to the winners in the remaining prize draws.

On 1st July this year, the ‘Big G1 Giveaway’ got underway which is exclusively open to members of Grant UK’s G1 Installer Scheme. Over the course of the promotion, which is running until 31st December 2018, thousands of prizes are available for G1 Installers to win, some of which are worth up to £400. G1 Installers simply need to register an eligible product via the G1 Portal or G1 Click app and they will win a prize!

The ‘Big G1 Giveaway’ consists of six prize draws with one draw taking place every month between July and December. Each month, the winners of the fifty top prizes are randomly selected from the G1 registrations submitted during that month, with the remaining entrants all receiving a Runners-Up gift. Every month, Grant UK is giving away ten Kane 255 Analyser Kits, ten Fill and Flush machine packs, and thirty Rhino 3m pipe carriers. Alongside these high-value top prizes, there are also thousands of Runner-Ups gifts available including tool sets and Kane pocket thermometers.

The first two prize draws have already taken place. Any G1 Installer who registered a Grant oil boiler, air source heat pump, biomass boiler or solar thermal system via their Portal or G1 Click app in July or August will have been entered into the respective month’s prize draw. From these entries, one-hundred installers have won one of the top prizes with all of the remaining entrants receiving Runners-Up gifts! In total, over a thousand prizes have already been despatched from Grant UK’s HQ in Devizes.

Four prize draws remain which will take place for September, October, November and December. Any G1 Installers who register an eligible product during these months will be automatically entered in a prize draw and will be guaranteed a prize! Whether it is a Kane 255 Analyser Kit or a handy voltage tester, everyone can be a be a winner with the ‘Big G1 Giveaway’!

I'm the Assistant Editor on BMJ. If you have any product or people information, or some news you'd like to share, please feel free to email me.
Previous Major trade show UK Construction Week joins Considerate Constructors Scheme
Next Royal visit marks manufacturing success at Norbord