Irish merchanting group Grafton showed a positive start to the year in January and February followed by a difficult March and start to April.

Unseasonably bad weather and freezing temperatures significantly affected the Group’s markets and reduced the rate of growth in average daily like-for-like revenue to 1.3% for the period. Group revenue increased by 7% to £907m in the four months and by 6.2% in constant currency – which calculates revenue without including fluctuating exchange rates.

Merchanting, which accounts for 91% of Group revenue, included a small decline in Selco sales due to the transfer of revenue from established branches to newer ones. 12 new branches opened during the period with a further three promiseed by the end of July. The group’s most recent merchanting acquisition, Leyland, has been trading in line with expectations.

The Irish merchanting trade was strong, due to good momentum in recovering residential and non-residential Repair Maintenance Improvement (RMI).

The Netherlands merchanting business also performed strongly against the backdrop of a growing Dutch economy and construction sector.

Belgium reported slightly more disappointing sales in merchanting despite a strong January and February, as there was less new build construction in March and April.

As for retailing, which accounts for 6% of Group revenue, Ireland reported successful figures due to a positive market along with store upgrades and extended product ranges in Woodies, which sells DIY supplies. 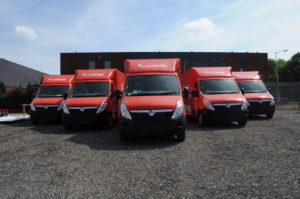 The overall outlook for the Group is positive and its expectation for the full year remains unchanged despite the weaker trading in March and April.

Chief Executive Officer of Grafton Group, Gavin Slark, said: “We should continue to benefit from exposure to strong growth markets in Ireland and the Netherlands and, consistent with our view coming into the year, expect underlying demand in the UK RMI market to remain subdued but house building to perform strongly.”