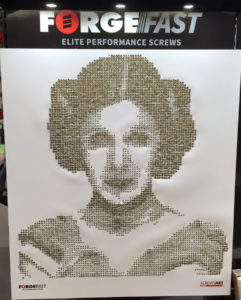 Leading wholesaler of respected brand fixings, fasteners, power tool accessories and hardware, ForgeFix is lending its support to an important industry cause.

The business has donated a unique portrait created using its products for sale at a silent auction to be held during the NMBS Gala Dinner on April 10th 2018 at the Ricoh Arena, Coventry.

All funds raised from the sale of the portrait – which depicts actress Carrie Fisher in her iconic role as Princess Leia from the Star Wars films – will be donated to CRASH charity.

The Leia picture is the latest in a series of portraits which ForgeFix has dubbed ScrewsArt™.

It has been created using over 5000 ForgeFast elite performance woodscrews and with the help of both existing and potential customers.

This includes customers who attended the ForgeFast launch events in 2016 as well as visitors to ForgeFix’s stand at various trade shows and exhibitions over the last two years.

Last year, the business also created a portrait of Steph McGovern which was given to the journalist and broadcaster while she was presenting her regular and roving BBC One breakfast feature from the UK Construction Week (UKCW) exhibition. She went on to praise the picture live on national TV.

ForgeFix’s donation of the Princes Leia image builds on the company’s previous donation of a David Bowie ScrewsArt™ portrait which was sold at a silent auction held at the NMBS Gala Dinner in 2017. It subsequently raised £1000.

Speaking of the Princess Leia donation, Brian Trevaskiss, marketing manager at ForgeFix, said: “We’ve positioned ForgeFast woodscrews in a new and elite performance category because they set a whole new standard in terms of their corrosion resistance, fixing speed and ease, holding power, pull-out values and much more.

“These characteristics are so exceptional that they surpass those of conventional ‘premium’ woodscrews and have to be experienced to be believed. That’s why we began offering customers the chance to insert screws into the ScrewsArt™ portrait templates so they could experience the benefits on offer for themselves.

“The resultant images proved so eye-catching and so popular that we wanted to do something worthwhile with them and donating them for charity auction by NMBS seemed liked the ideal solution. In this way they can not only be enjoyed by their eventual owner but also help to benefit those in need across our entire industry.”

I'm the Assistant Editor on BMJ. If you have any product or people information, or some news you'd like to share, please feel free to email me.
Previous Warning signs for construction as output drops, says FMB
Next Sydenhams have acquired Tipadel Limited, Frome