Playing alongside Rudridge’s staff were a number of former football pros and international legends. Amongst them were Peter Beardsley, Paul Walsh, Lee Hendrie, John Salako, Nigel Winterburn and Clinton Morrison.

Rudridge, which has branches in Farnham, Gravesend, Brentford and Horsham, organises the annual event with help from former England player Tony Cottee. The company was also joined by a number of its customers and suppliers from across the country. 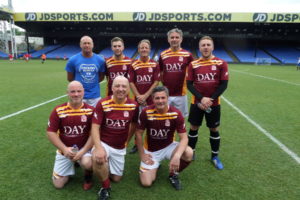 In total, 10 teams – each of which included one of the ex-pros – competed in a series of matches throughout the afternoon testing their skills and prowess alongside the legends.

The winning team, which included Paul Walsh, was announced as Days Nights from Day Aggregates who beat Bretts Bullets 3-2 on penalties after drawing 0-0.

Paul Duke, Sales Director at Rudridge, said “Once again we had a great turn out for our popular 7-a-side football event. We’d like to thank everyone who took part, Tony Cottee for making sure it all went smoothly and all the pros for being such good sports.”

I'm the Assistant Editor on BMJ. If you have any product or people information, or some news you'd like to share, please feel free to email me.
Previous Euramax extends range with Travis Perkins
Next Politics and Paralympics combined at BMF Conference second day