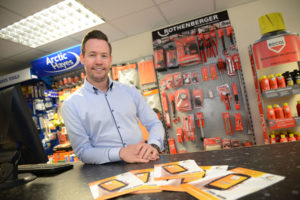 The FSB Celebrating Small Business Awards recognise the best small businesses and the self-employed from across the UK, from every sector and industry and from businesses of all ages and all sizes.

Since Flame was established, in 2011, it has achieved year-on-year, double-digit growth, and employs in excess of 60 staff.

Over the last 12 months, Flame has opened three trade counters in Scotland – its first outside of the North East – and expanded into the North West with the opening of a branch in Carlisle.

Flame currently operates 12 trade counters across the UK and is expecting to launch further outlets, as well as double its headcount over the next three years. In November 2018, the merchant also invested in a new head office, in Boldon.

As a result of winning the regional Scale-Up accolade, Flame will now contest the national FSB award on May 23 at the UK Final.

John Savage, Managing Director of Flame Heating Group, said: “I am incredibly proud of the progress Flame has made in recent years, which is testament to the hard work and dedication of our growing team. To be recognised by the FSB is welcome news and shows just how far the company has come in a relatively short period of time.

“We have plenty of scope for further expansion and investment in our services and infrastructure, which will help us achieve our ambitious growth strategy. I am excited for our future and hopefully we will celebrate continued award success along the way.”

I'm the Assistant Editor on BMJ. If you have any product or people information, or some news you'd like to share, please feel free to email me.
Previous Wienerberger acquires BPD to strengthen position in roof market
Next New Climate control Fleeces from Snickers Workwear