It is a tale told by an idiot. Full of sound and fury, signifying nothing.

I tried. Truly, honestly, I tried to stick with it. But it was just so irritating and predictable. I ended up switching over to Italy v Brazil. At least that meant I was watching something played with passion and heart and commitment, instead of five blokes who all want the most important job in the land, all trying to convince the TV audience and each other that their case is so much better than all the others’.

The televised debate format, which worked so well when it was three participants (pretty sure it was his performance in 2010 that got Sir Nick Clegg enough votes that the Lib Dems had no choice but to go into coalition) just seemed messy and shouty with five people. And quite what the point was of those really uncomfortable-looking bar stools, unless it was to make them all look slightly shifty as they jostled around trying to get a better position. Rory Stewart taking his tie off was, presumably, his “Call me Dave” moment – hey, I’m so down with the electorate that I don’t need to look like I’m part of the establishment. Remind me again where you went to school Rory? Oh yes, Eton and Balliol. Just like err, Boris.

Jeremy Hunt made a somewhat surprising admission that some of his cuts to social care had been a bit, well, too much. No sh** Sherlock. Incidentally, the unfortunately monikered MP is getting heartily fed up of all the mispronouncements of his name. It has happened so often that it wouldn’t surprise me if there isn’t a secret journalist’s club, one that you can only be in if you’ve “accidentally” called Jeremy Hunt a….

It is Hunt’s assertion that the EU wants to have someone that they can trust and will want to talk to and that that person would be him rather than Boris, whose very Borisness is likely to put the EU’s back-up.

Johnson is clearly thought of by the majority of Tory MPs as ‘a man who can get it done’ – whatever IT is. And that’s probably right as long as he has the sense – and I think he probably does – to surround himself with people who actually can. Rather like he did when he was mayor of London. I don’t think he covered himself in glory last night, being impossible to pin down on anything and being slightly defensive and evasive. He was particularly oily on the subject of Nazanin Zaghari-Ratcliffe, languishing in an Iranian jail and helped not one iota by Johnson’s sticking his oar in.

Then we have Michael Gove who as a former journalist knows the importance of deadlines and the lovely whooshing sound they make as they fly past while you are just tying down that last, better quote/EU deal/fact.

Sajid Javid managed to get all the participants to agree to an investigation to root out Islamophobia in the conservative Party – a worthy aim, though he might want to check out how well a similar drive against anti-Semitism in the Labour Party has gone.

Javid looks like the next one to follow Dominic Raab out on the walk of shame, having only just scraped through with barely sufficient votes to take him over the crucial 33.

The best bits from last night were questioner Camilla’s eye-roll, which probably summed up how most of the audience were feeling at that point, Erin, the student declaring that none of them have a clue about climate change and Michael Heseltine in the Newsnight studio who described it as “a masterclass in avoiding the answers to questions… and there were a lot of assertions which make no sense.”

#OurnextPM – blimey. Anyone got a paddle? 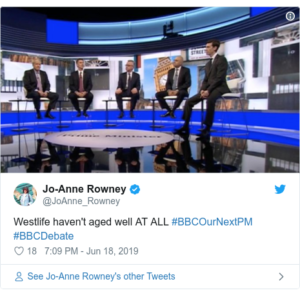 Group Managing Editor across the BMJ portfolio.
Previous Headline charity for first ever Regatta London revealed as Mates in Mind
Next Knauf Insulation monkey about with donation