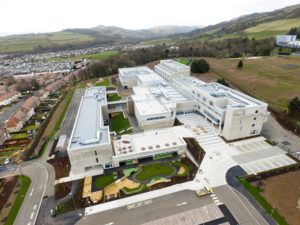 It was a day to remember for pupils and staff in what was a fitting celebration of North Ayrshire’s newest and largest school.

Described as the ‘perfect place for young people to learn and develop’ the Campus has potentially the biggest games hall in the UK and the Council’s partnership with sportscotland, whose Inverclyde base is next door, means pupils have access to a wide range of top-class sporting facilities.

The Campus – which comprises Largs Academy, St Mary’s Primary and Largs Primary – also has ultra-modern classrooms, with breakout spaces, across each of the three schools, and was delivered as a result of a collaboration between hub South West, the construction and infrastructure-focused partnership which works with local authorities and private sector enterprises, Morrison Construction and North Ayrshire Council.

Other features include art classrooms with balconies that enable the provision for outdoor working and two stunning theatres with lighting and sound systems as good as any theatre in Scotland. There is also an Early Years Centre with state-of-the-art facilities that incorporate parent rooms, family rooms and imaginative play and learning areas for young people.

The First Minister was given a tour of each of the establishments as she discovered just why the Campus is one of the finest facilities in Scotland. She said: “I am delighted to officially open the tremendous new Largs Campus buildings. It’s clear to see that the pupils and staff are all enjoying and benefiting from their new learning environment.

“What’s more, not only do these new schools provide enormous benefits for the education of our children and young people, they also help the local economy with jobs and apprenticeship opportunities during construction, and will serve the wider community now that they are open.”

Works on the Largs Campus began in August 2016 and contractors Morrison Construction finished works earlier this year.  The two primaries and Early Years moved into the Campus in March before being joined by Largs Academy a month later.

Michael McBrearty, Chief Executive of development partner hub South West added: “Largs is an outstanding new campus that hub South West is delighted to be a part of. To be at the official opening today and see pupils utilise this fantastic facility is a real testament to the hard work and innovation that all parties brought to the process of delivering the new campus.

“Largs Campus will provide excellent facilities for the wider community and transform education in the seaside town.The setting is spectacular and the opportunities for sport and outdoor learning in the neighbouring facilities are absolutely first-class.”

Morrison Construction and Operation’s Director Allan Cunningham, said:‘It was wonderful to see the First Minister tour this fantastic campus and meet pupils and teachers who have been enjoying the state-of-the-art educational, arts and sporting facilities.

“We are proud to have delivered this project that will provide a lasting benefit to the community and which positively impacted on the local economy by supporting 25 work placements, 13 apprentices and creating 73 new jobs during construction.’’

I'm the Assistant Editor on BMJ. If you have any product or people information, or some news you'd like to share, please feel free to email me.
Previous Aggregate Industries helps to keep housebuilders in supply
Next New Head of Supply Chain at Moores