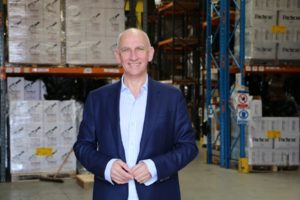 Since founding in 1989, the Exeter-based company has introduced game-changing technologies and developed a comprehensive range of market-leading self-adhesive protection film products and rescue products.

In celebration of its 30 year anniversary, Packexe has launched a UK-wide ‘Golden Ticket’ competition, giving customers the opportunity to win £30,000 of holiday vouchers and £30,000 of Packexe products.

Golden Tickets have been hidden in hundreds of rolls of Packexe, stocked by distributors Travis Perkins and Dulux Decorator Centre as well as products available directly from Packexe.

Packexe CEO, Andrew Orchard said: “Since our founding in Exeter 30 years ago, we’ve had an incredible journey – a journey of innovation, launching the most tried and tested self-adhesive protection film product the market has seen, and building a set of knowledgeable and loyal customers which now spans the world. It has been a fantastic adventure! We’re planning a 30th year to remember, starting with the Golden Ticket giveaway as a big thank you to our loyal customers.”

Along with continued growth in the UK market, Packexe now sells a range of products including Protection Film, Handy Wrap, SMASH and Sharpswrap, in 54 countries across Europe, along with the USA, Canada, Middle East, Australia, New Zealand and Asia.

Packexe is used by tens of thousands of builders, painters, decorators and DIY devotees. Its products, have also been used to protect key national icons, including wrapping Concorde, during work at the Aerospace Bristol Museum, and protecting Exeter Cathedral’s historic collection of books during building work.

Jill Taylor, Director of Development at Exeter Cathedral said: ‘’During extensive building work at Exeter Cathedral’s historic library, priceless books dating back centuries needed to be kept safe. Even the slightest risk of damage was not an option. Packexe provided a solution and a significant cost saving of £50,000 as everything was able to stay in situ. The books were protected from dust and damage by Packexe film for the duration of the contact.

In 2016, Packexe received the Royal Warrant in recognition of the Royal Household’s use of Packexe.

Innovation continues, with Packexe Fleece the latest product to be unveiled after six years of research and testing. Packexe Fleece offers customers a reusable and cushioned surface protection for the most delicate of surfaces, avoiding the rutting and trip risks of dust sheets.

Orchard added: “2019 is shaping up to be an extraordinary year, with new products in development and exciting projects that we will be revealing soon. We’ve got a busy year ahead and of course will be continuing to focus on developing and delivering the very best products for our customers both in the UK and around the world.”

To celebrate 30 years, Golden Ticket Rolls are now in stores and the competition runs until 30th September 2019. Packexe products are available at Travis Perkins and Dulux Decorators Centers and by calling Packexe on 01392 438191. Terms and Conditions can be found online: www.packexe.co.uk/competition

I'm the Assistant Editor on BMJ. If you have any product or people information, or some news you'd like to share, please feel free to email me.
Previous Summer  Promotion Launched for Bushboard’s Vista
Next Work at Height Tips from Scaffold Towers