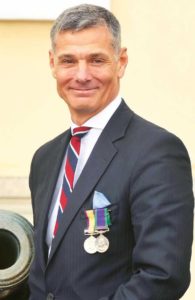 Squadron Leader John Peters as the Keynote Speaker at the BMF Members’ Annual Conference on 19 September 2019.

Squadron Leader John Peters came to international attention in January 1991 when his bruised and battered face flashed onto television screens around the world.  He was captured and tortured after his RAF Tornado was shot down over Iraq during the first Gulf War and his disfigured image became a potent symbol of Saddam Hussein’s ruthless aggression.

John Peters, along with his navigator, John Nichol, described their experience in the best-selling book “Tornado Down”, described by one reviewer as the most compelling story of the Gulf War.

While his Gulf War experience tested him to the absolute limit, far from being doom and gloom, his speeches exude warmth, humour and tenacity moving audiences from laughter to tears to inspired reflection.

BMF CEO John Newcomb said: “John shared some of his extraordinary life experiences at our Anniversary Dinner last year, when he also spoke on the RAF’s 100 year anniversary and the work of the RAF Association, the charity which supports the RAF family.  Anyone who was there would attest to the power of his personal presentation and I am delighted that he is now able to share it with a wider audience of BMF members.”

The BMF Members Annual Conference and black-tie Awards Dinner takes place on 19 September at St George’s Park, Burton on Trent, the home of England’s national football teams.  The BMF’s annual Golf Tournament will be held on the previous day, 18 September at the newly-opened JCB Golf and Country Club.

John Peters’ appearance is sponsored by UK Construction Week. Our thanks to them and to the BMF Members’ Conference headline sponsors, Encon Insulation, and Marsh Industries and JCB, sponsors of the Awards Dinner and Golf Tournament.

A limited number of delegate tickets are still available for this event. For more information visit the BMF website at www.bmf.org.uk/events or contact: june.upton@bmf.org.uk

I'm the Assistant Editor on BMJ. If you have any product or people information, or some news you'd like to share, please feel free to email me.
Previous The BMF and Variety help sporting star soar
Next Snickers’ New Workwear Catalogue