Footballer Laura Bassett, one of the first female players to be awarded a professional contract, will speak at BMF Members’ Day Annual Conference & Awards which takes place at St George’s Park, the FA’s national football centre in September. 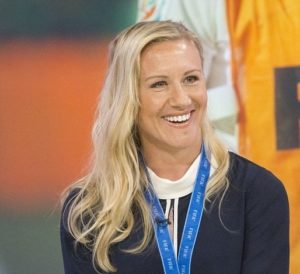 With over 60 international caps under her belt, including a bronze medal from the hugely successful 2015 Football World Cup, Laura Bassett has been a key figure for England’s Lionesses for almost a decade. Her international career includes two World Cups and three European Championships, securing a silver medal in the 2009 Euros and reaching the semi-finals of the 2017 Championships in the Netherlands before being knocked out by the hosts and eventual winners.

Domestically, Laura has been one of the FA’s Women’s Super League’s most revered players. She has played for Arsenal, Chelsea, Leeds, Birmingham City and Notts County Ladies FC, winning both the FA Cup (twice) and the Premier League during her career. She is also a UEFA Level 3 Licence Coach.

BMF CEO, John Newcomb said: “We are delighted to welcome Laura to speak at Member’s Day. As the BMF embarks on its own campaign to increase the diversity of young people coming into merchanting her experience, both of captaining her Super League team and of being a prominent figure in the challenging world of a male-dominated sport, is sure to resonate.

The theme of BMF Members’ Day Annual Conference & Awards 2018 is “The Future belongs to the Bold”.  The Business Conference and the BMF’s black-tie Awards Dinner, which celebrates the achievements of young people working in the industry, both take place on 27th September.  The BMF’s annual Golf Tournament and other social activities will be held on the previous day, 26th September.

The BMF thanks Encon Insulation, the headline sponsor of BMF Members’ Day Annual Conference and Awards 2018, and Marsh Industries and Monument Tools, who sponsor the Awards Dinner and Golf Tournament.

I'm the Assistant Editor on BMJ. If you have any product or people information, or some news you'd like to share, please feel free to email me.
Previous New Appointments at Roxor Group
Next Dundee students get a taste of the built environment industry