BSRIA is pleased to announce that Mike Smith, Engineering Director, BSRIA, has been made an Honorary Member of BSRIA. This is only the 11th time this honour has been awarded in the 64-year history of the Association. The award recognises an extraordinary contribution to the Association and the independent promotion of best practice in the building services industry.

A leading figure at BSRIA for over 30 years, Smith has always demonstrated engineering excellence for BSRIA and its members and the wider industry and been an ambassador for best practice.

Smith joined BSRIA in September 1988 to run ‘The Maintenance Centre’ which at the time had two research contracts and no staff. Over the next 12 years he built a large team concentrating on three main themes – improving maintenance management, improving the efficiency of air conditioning refrigeration systems and improving construction productivity. 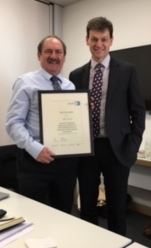 At the high point of government support for research in construction under the ‘Partners in Innovation’ scheme in the late 1990s, Smith was responsible for the delivery on 56 separate research projects. This co-authored work produced well over 40 of BSRIA world renowned publications including the early versions of BG 6, the commissioning guides, the only large-scale performance trials of VRF equipment and guides about offsite construction and business focused maintenance.

At the 1999 AGM, Smith was elected to the BSRIA Board a position he retains to this day.

His technical career has also spanned senior roles outside BSRIA. Indeed: his research achievements for the industry as a whole have also driven his own personal contribution to CIBSE. As a long-term member of to the Knowledge Management Committee (KMC), Smith has ensured vital consistency between CIBSE publications and BSRIA’s research.

In October 2010, he was awarded the CIBSE Silver medal and in April 2016, Smith was also made an Honorary Fellow of CIBSE in recognition of his contribution to CIBSE and industry. He is a Fellow of the Institute of Refrigeration and for many years was on its Technical Committee. He is a Board member of the Air Conditioning and Refrigeration Industry Board – an initiative dedicated to promoting all forms of air conditioning and refrigeration. He has been an ASHRAE member for over 25 years and has contributed to its technical committees and handbooks.

Smith has contributed exceptionally to the development of BSRIA’s engineering facilities over the years and his knowledge has been invaluable; always delivered with generosity, good humour and humanity.

Commenting on the award, Julia Evans, BSRIA Chief Executive, said “Mike is highly respected by everyone associated with BSRIA as is demonstrated by his nomination for this award by his peers from across the industry at the BSRIA Board. This is a well-deserved achievement for Mike and I speak on behalf of all his colleagues both in BSRIA and the wider industry in congratulating him.”

I'm the Assistant Editor on BMJ. If you have any product or people information, or some news you'd like to share, please feel free to email me.
Previous MRA Marketing strengthens its research division
Next Welsh Slate helps bring dignity to a pioneering palliative care facility