Selco Builders Warehouse is in the process of modernising a host of its longest-standing branches, including its Croydon site on Mitcham Road, which has been through a £10m update.

The branch welcomed some special guests to help celebrate the relaunch, with Crystal Palace FC (Women) players Jade Davenport and Nikita Whinnet taking part in a crossbar challenge event with staff and customers on the day. Branch staff also helped raise more than £400 for charity partner Macmillan Cancer Support as a part of the events, thanks to a charity cake sale and wet sponge competition with the branch’s senior team.

Selco’s branches in Reading and Tyseley are the others to have already been refurbished, with similar plans in the pipeline for six other London branches. Howard Luft, Selco chief executive, said: “Over recent years, we have placed a significant focus on opening new branches which has seen our network grow to 66, with plans for that to rise further.

“However, we are determined to ensure that our existing branches remain a key priority and it is important we bring them in line with the modern standards tradespeople associate with new Selco outlets.

“Croydon is a vitally important branch for us and the driving force of this refurbishment programme is to make branches as convenient and reliable for customers to use as possible.

“We are also determined to maximise our green credentials with initiatives such as installing full LED lighting and an energy management system.

“It was fantastic to welcome Jade and Nikita along to the branch’s relaunch, as we held a crossbar challenge for tradespeople to test their skills. A big well done must also go to our Croydon branch staff, who helped drum up funds for our charity partner Macmillan Cancer Support on the day.”

Among the changes at Croydon has been the introduction of new style checkouts and power tool displays, improvements to the sales floor and updates to internal and external signage.

The size of loading and unloading areas in the customer yard has increased, while the cafe and staff and training areas have also been renovated.

Selco’s has a network of branches across the region including South Croydon, Mitcham and Sutton. 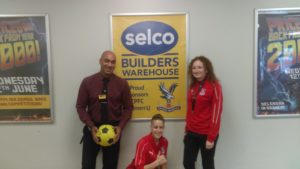 I'm the Assistant Editor on BMJ. If you have any product or people information, or some news you'd like to share, please feel free to email me.
Previous Market conditions hold Grafton back
Next Kudos Appoint new NPD Manager