Covers Timber & Builders Merchant has supported the Chichester Half Marathon for a fifth consecutive year.

Staff member, Morgan Harris, from the company’s Aldershot depot, tackled the 13-mile course, completing it in one hour and 51 minutes.

The Chichester Half Marathon or ‘Chi Half’ is organised by the international charity Children on the Edge, which helps to support some of the most vulnerable children in the world including the refugees who have fled from war and persecution in Syria.

In addition to Harris’ efforts, Covers once again sponsored the bags that all registered runners received upon completing the race.

Harris, who works at the Covers Aldershot depot, said: “It was a tough challenge but it felt good crossing the finishing line. It was an honour to represent Covers, which has been part of this fundraising initiative for the last five years.” 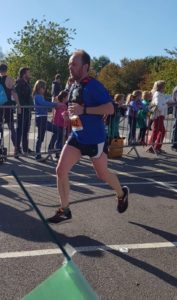 “Congratulations to Morgan on his immense achievement. I know that anyone who runs the course finds it a real challenge so they should be extremely proud.”

I'm the Assistant Editor on BMJ. If you have any product or people information, or some news you'd like to share, please feel free to email me.
Previous Bull takes fire safety to new heights
Next Bosch carbide technology means sabre saw blades last up to 20 times longer