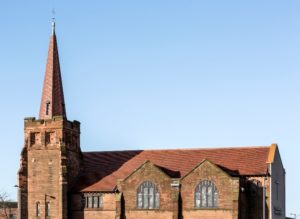 Craftsmanship and attention to detail received their just reward when the re-roofing of Shettleston New Parish Church in Glasgow’s East End won the Roof Tiling category in the National Federation of Roofing Contractors’ UK Roofing Awards. The award was made to DM Roofing & Roughcasting, working with BMI Redland – part of BMI UK & Ireland, the UK’s largest manufacturer of flat and pitched roofing and waterproofing solutions.

Originally opened in 1904, the Grade B listed church is a handsome Arts and Crafts style building with Art Nouveau detailing characteristic of the work of the noted Scottish architect W. G. Rowan. The roof – finished in clay tiles, unusually for Scotland, rather than slate – had reached the end of its life, leading to water ingress and rot.

With the Heritage Lottery Fund making a large contribution towards the cost of the essential repairs; the architect in charge of restoring Rowan’s legacy, Peter Drummond, initially specified an alternative clay tile while DM Roofing lobbied to use BMI Redland’s Rosemary clay tile: “We’re used to using the Redland tile and find them better to work with. They give a sharper finish, which we think can be aesthetically superior for some buildings”, explains director Michael McCabe.

“I agreed at once,” says Drummond. “BMI Redland are respected manufacturer. In fact, Rosemary’s pretty much the go-to name, especially when you want tiles for a restoration project”.

Two turrets, 14m and 3m tall, were the major challenges in the project, even though they only accounted for 55m2 of the 488m2 roof area. When McCabe inspected the roof, he found that the pre-formed arris hip tiles had been used originally were ‘specials’ and unavailable from stock at the angle required for the turrets. The tight re-roofing schedule meant that there was not enough time for these to be made to order so DM Roofing replaced them with a combination of Code 4 lead soakers and tiles that were individually mitred by hand.

“Keeping the mitred joint straight over a 12m span was a challenge and one that our roofers successfully overcame, carrying it out to an excellent standard”, McCabe observes. The lead flat roof at the bottom of the turrets proved another challenge because these areas had rotted so much that the damage could be seen from inside the church. To remedy this, the team reconfigured the sump detail to ensure this would not be an issue again.

The rest of the roof wasn’t without issues – as the existing tile details had no battens, making it difficult to level the new tiles with the old. As the interaction between the new tiles and stone barge copes did not work, mock panels and level checks had to be done to ensure the roof was both aesthetically pleasing and fit for purpose.

The first Rosemary plain clay tile was made back in 1838, the year of Queen Victoria’s coronation. Many of the tiles laid then are still very much in evidence on buildings around the UK, which is why contractors, architects and specifiers need contemporary versions to match.

Some 175 years after that first Rosemary clay tile was formed, BMI Redland launched its Rosemary Clay Craftsman range, designed to give the look and feel of a handmade tile with all the strength and durability of a modern-day one. Characteristics that give the Craftsman their beautifully aged look include the textured surface, irregular distortions to the front edge and varying hanging lengths.

Three versions of the Rosemary Clay Craftsman are available: Hawkhurst and Albury, which have a fine orange-red sanding over the surface and random black patterning to imitate a weathered look; and the Victorian, which is darker and has a grittier texture.

Even though often used for restoration and refurbishment projects, Rosemary Clay Craftsman tiles are also in demand for new-build developments that are linked to conservation areas. A whole host of compatible accessories and components means that the tiles can be laid on a variety of roof configurations.

Unlike its Victorian counterpart, the latter-day Rosemary Clay Craftsman Victorian, and the rest of the range, has undergone a robust programme of testing, subjected to driving winds and high rains, whipped up by BMI’s engineers in their wind tunnel. The tiles will meet all the requirements of BS 5534: 2014 + A2: 2018 Code of Practice for Slating and Tiling, providing they are installed in compliance with Redland fixing recommendations.

I'm the Assistant Editor on BMJ. If you have any product or people information, or some news you'd like to share, please feel free to email me.
Previous Winner of Dulux Academy’s ultimate wallpapering challenge 2018
Next Forticrete to showcase innovative range at the Build Show