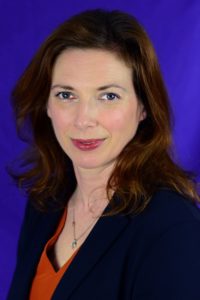 Suzannah Robin, alcohol and drug safety expert at AlcoDigital, has helped numerous companies to address their alcohol and drugs testing requirements. She explains why implementing testing policies and procedures will help to improve workplace safety.

Alcohol and drugs misuse is becoming something of a thorny issue for the UK construction sector. For reasons that aren’t fully understood, the industry has been identified as ‘higher risk’ in terms of drug use, and more than a third of construction workers say they have witnessed a colleague under the influence of drugs or alcohol.

According to a survey carried out by risk assessors protecting.co.uk on employees from a range of sectors, nearly a third admitted to using drugs at work. A significant number claimed to be ‘under the influence’ every working day. In fact, many of those admitting to taking drugs were using cannabis or other illegal narcotics.

Despite the availability and increasing use of screening tests, around 65% of workers say they have never been tested, while a quarter said they had been tired at work because of the effects of drugs or alcohol.

Construction is the most dangerous industry to work within in the UK. There were 38 fatalities in the past year, according to provisional figures issued by the Health and Safety Executive. Falls from a height were the most common cause of death, followed by being struck by moving vehicles or objects.

In terms of non-fatal injuries, there are 58,000 incidents each year, and there are 82,000 work-related ill-health cases. Of these ill-health cases, 62% were caused by musculoskeletal disorders and 25% were caused by stress, depression and anxiety. This is significant as these conditions have been linked with the use of drugs and alcohol. While there is no data available to establish if any of these incidents were related to drugs or alcohol, it seems likely that they may have played a part in a proportion of cases.

Screening and the law 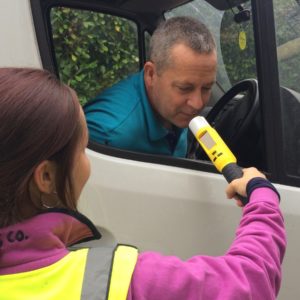 So what is the law for workplace testing in construction? Testing is legislated for in certain sectors, such as the aviation, rail and shipping industries. But while most larger companies now have a policy in place to deal with drug and alcohol misuse in the workplace, the construction industry is not legally required to enforce testing.

However, employers do have a duty of care to maintain a safe working environment under the provisions of the Health and Safety at Work Act. If methods for detecting misuse are not implemented and an accident occurs, employers could face hefty fines or even be prosecuted. In the high-risk construction industry, it’s therefore vital that a robust policy is introduced.

For high associated risk industries, it’s recommended that drugs and alcohol testing is carried out on a regular basis. For alcohol testing, a range of professional police-grade breathalysers are available for screening workers, such as AlcoDigital’s AlcoSaber (£295 + VAT), that will provide quick, accurate and instantaneous results.

Alcohol interlocks are also available, which prevent equipment or machinery from starting until a negative breath test has been given.

For many years, urine tests have been used as a reliable and cost-effective form of drug testing, providing instant results. This is useful for random testing and can serve as a deterrent to employees. However, urine tests often fail to reveal if an individual has consumed drugs in the last two hours.

Blood testing is the most accurate method of establishing what drugs are in a person’s system – but the medical training and laboratory analysis required mean it’s impractical for regular testing policy. Hair testing can provide historical data of what drugs a person has used – but not from the most recent few weeks. 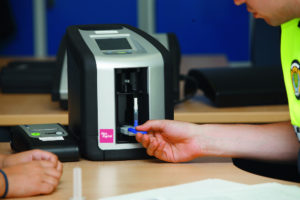 For this reason, oral fluid collection has been established as the most practical method for drug-testing. With a far simpler collection process and a window of detection that mimics that of blood testing, this is the method of choice for UK Police roadside testing.

Over the last decade, huge progress has been made in terms of tackling illegal drug use and alcohol abuse in the workplace. Now it’s time for the construction industry to address the issues head-on and direct their attention towards putting in place policies and practices to make drug and alcohol screening compulsory across the industry.

I'm the Assistant Editor on BMJ. If you have any product or people information, or some news you'd like to share, please feel free to email me.
Previous D.W. Nye to expand its premises
Next Welfare 4 Hire’s 200th EasyCabin unit given to charity