Two members of staff at Chandlers Building Supplies have been presented with top awards plus £500 each at the builders merchant’s annual conference.
The Best New Starter Award was presented to Georgia Tidey from its Thanet branch and the Outstanding Contribution Award was presented to Nick Fennell, a sales team manager at its head office branch in RIngmer, East Sussex.
Tidey joined the team at the Ocivan Way branch of Chandlers just over a year ago. She was nominated for her exceptional ‘can do attitude’ that delights customers 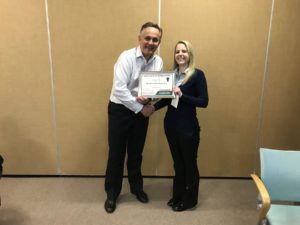 and has quickly made her a valued member of the team.
Fennell was nominated for his exceptional commitment to the company throughout this 12 years in the business, as well as his positive approach to taking on extra work when needed.
Andrew Cope, MD, Chandlers Building Supplies, said: “Both team members have demonstrated all the key attributes required to win these awards. These include contributions that exceed expectation, willingness and ability to deliver strong results and strong team players. Congratulations to Georgia and Nick  – we are delighted to have you as part of the Chandlers Buildings Supplies family.”
With over 200 staff spanning its network of 13 branches from the South East to the West Midlands, nominations are submitted by managers throughout the Chandlers Building Supplies network and are judged by the managing director, finance director and HR manager.
Introduced in 2014, the awards have developed into a highlight for staff and managers, with growing anticipation for the winners reveal. Next year, an award for Driver of the Year will also be introduced. 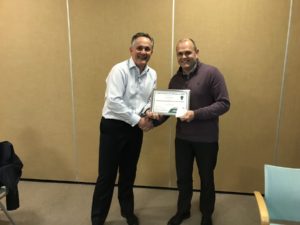 Chandlers Building Supplies is a family owned builders merchants with branches throughout London, the South East and the West Midlands. It celebrated its 25th anniversary last year and is backed by a reputation that spans 140 years since its original inception in Sussex.

I'm the Assistant Editor on BMJ. If you have any product or people information, or some news you'd like to share, please feel free to email me.
Previous Leading manufacturer puts full weight behind campaign to protect against tool theft.
Next Bromsgrove MP Visits Selco