CCF, a leading insulation and interior building products distributor with 41 branches nationwide, has celebrated one year of trading at its Exeter branch.

The Exeter branch was added to the CCF network in 2017 in order to meet demand from interior building contractors and construction specialists in South West England. Now a year on, the branch team has grown from 20 to 28, and three new Econic trucks have been added to the branch’s vehicle fleet in order to improve the speed and frequency of deliveries.

Steve Quarrington, Regional Director at CCF, commented: ““The first year of trading is an important period, so we are thrilled that CCF Exeter has had such a productive first 12 months. The branch is an important addition to the CCF branch network in the South West of England, and we are proud of what has been achieved so far. In the years to come, we know CCF Exeter will continue to succeed and we’re excited to see what the future holds.”

Allan Leaves, Branch Manager at CCF Exeter, added: “I am proud of the achievements made in our first year of trading and credit our success to the fantastic team we have at CCF Exeter, the excellent product choice and availability on offer, and last but certainly not least our loyal and growing customer base.”

CCF Exeter has also made positive contributions to CCF’s charity of the year, the Alzheimer’s Society. £55,250 has been raised so far as a business with a target of £100,000 to reach by 2019. 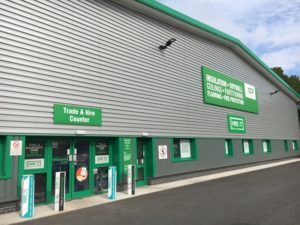 I'm the Assistant Editor on BMJ. If you have any product or people information, or some news you'd like to share, please feel free to email me.
Previous Abacus Elements re-launches its range of Tile Backer Board
Next Major trade show UK Construction Week joins Considerate Constructors Scheme