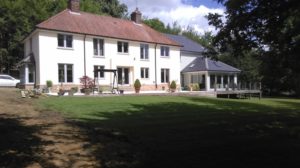 Black Millwork has supplied a range of its products, as well as Andersen windows and doors to an ambitious new self-build project in Suffolk. The impressive detached home was in development for two years.

The project has been in the works for many years and after an eight-month planning phase, work began on site in August 2014. The development was completed in August 2016. The ambitious self-build project has been a labour of love for developers, Jeff and Catriona Addison, who are now living in the property. Throughout the process the couple was stringent in ensuring the quality of the building materials used were of the highest specification.

The relationship between Black Millwork and the Addison’s first began at a recent trade show. The company was exhibiting a range of its products when the couple approached them. The Addison’s were looking to explore an American aesthetic on the property, taking inspiration from the ‘New England’ style. Working with Black Millwork allowed the self-builders to stick to these design goals, with little compromise.

Black Millwork supplies a range of products that encompass this desired American style, as well as numerous products from the Andersen range, which were also suitable. The property has been equipped with a vast array of Black Millwork goods including exterior, entrance and patio doors. The company also supplied a range of Andersen windows for the exterior of the property. Carefully designed with the authentic architectural style in mind, each piece of hardware installed at the property combines high performance values with appealing aesthetics.

To meet their design goals it was imperative the couple found a company who could provide bespoke product solutions for the project. Self-build projects often require bespoke solutions, especially when those in charge of them are looking to achieve a desired aesthetic. On this project, the homeowner had specific aesthetic goals in mind, which would have been difficult to attain without bespoke fenestration products. Black Millwork has extensive experience in providing bespoke goods and as such was a logical choice.

Speaking on the project, homeowner and designer, Addison commented: “This project was extremely important for us and it’s fantastic to finally see it completed how we planned it. When it came to choosing suppliers we wanted to take our time and explore numerous options. We eventually met Bob Heller at Black Millwork almost by chance at a trade show. After looking at the quality of the products and speaking to the guys it became obvious they were the right partners for our project. We needed a supplier who could provide us with bespoke solutions, so Black Millwork were the perfect fit.”

Addison continued: “The experience we’ve had working alongside Black Millwork has been positive. Whenever you embark on a project of this magnitude there are going to be hiccups along the way and this build was no different. What I was really impressed with was the way the company and in particular Bob handled these difficulties. Issues were resolved in a timely manner and I always knew I could speak to the guys at Black Millwork if a problem arose.”

Building the property of your dreams can be a testing ordeal, and it is inevitable self-builders will face a number of challenges along the way. However, as the Addison’s have shown, if a clear design goal is established and specified to accordingly the results can be remarkable. With the help of Black Millwork, the couple has turned their dream for a bespoke high quality home into a reality and will benefit from the results for years to come.

I'm the Assistant Editor on BMJ. If you have any product or people information, or some news you'd like to share, please feel free to email me.
Previous White knight roofer races to the rescue of pensioner
Next Velux offers more rewards to customers this Autumn iF Design Award for Hultafors Tools Ceramic expertise from Villeroy and Boch

Findings have been published in a new report, Builders Merchants Share Top Predictions for 2022, …