2019 will be a justified year of celebration for the team at Pland Stainless as they mark 100 years in British manufacturing. Established in 1919 on the same site, based on the Lower Wortley Ring Road in Leeds, the company has some exciting plans to reveal during the year that will suitably mark the occasion. 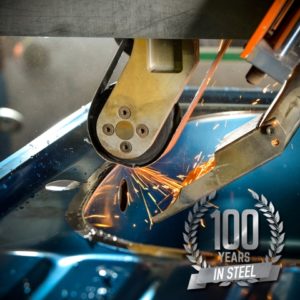 As one would expect with such a long trading history the business has changed and flexed to chase emerging markets over the years.  When formed In 1919 it was called the Taylor File & Tool Company and in 1926 changed its name to Taylor Rustless Fittings in line with a change to produce stainless steel butchers’ fittings.  It was in 1936 that they became the Stainless Steel Sink Company Limited (Trademark PLAND), the first to manufacture stainless steel sinks in the UK for both the Catering and Domestic markets.  In 1993 it became part of The Spring Ram Corporation and as the group moved its domestic stainless steel sink production to Malta, here in the UK, Pland evolved to become a key commercial supplier.

In the year 2000, Pland became independent again from any group ownership and in 2008 the management team, led by current MD Steve Duree and Operations Director, Ian Hodgson, acquired  the business.

Throughout the years and despite different ownership, the business has continued to employ and train skilled engineering personnel (some multi-generations) to manufacture robust and well engineering products that are prevalent in many UK buildings today.  In fact they claim that their most important asset by far is their workforce, most of whom are time-served craftsmen who have learnt their trade through years of service with Pland.  They have been committed to offering an apprenticeship scheme too since 2014, to continue to train skilled workers for their business.

Pland products today are largely designed for the healthcare, sanitaryware, washrooms, laboratory, education, catering, janitorial and the secure accommodation market places.  But a growing and significant proportion of their business is made up of bespoke products where their technical team, work with the client to design stainless steel products that deliver specific solutions, using their in-house CAD/CAM and 3D modeling technology.

I'm the Assistant Editor on BMJ. If you have any product or people information, or some news you'd like to share, please feel free to email me.
Previous Covers Chichester donates wheelbarrows to animal charity
Next 2nd Horsham Scout Group latest D.W. Nye campaign winners