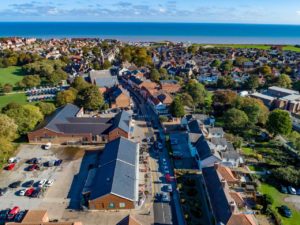 The £950,000 contract, under the YORcivil2 framework on coastal highway from Bridlington to Withernsea, involves works in sensitive areas such as Market Place, Bull Ring Roundabout, Tesco’s Roundabout in Hornsea and Queensgate Square in Bridlington.

Working with its partner & sister company, Specialist Surfacing, Britcon completed the twilight contract with a tight timeframe to include planing and resurfacing works and in some cases reconstruction of road surfaces.

Britcon was successful in being appointed as one of less than 30 Yorkshire contractors to the YORcivil2 framework across all Yorkshire regions in 2017.

YORcivil2 is a collaborative regional construction framework for the procurement of civil engineering/highways contractors to carry out projects for the Yorkshire and Humber region’s 22 local authorities, other regionally-based public sector bodies and third sector organisations.

Paul Clarkson, Managing Director at Britcon said, “This is a fairly intensive project given that we had to complete the upgrades overnight in just five months. The brief was much more complex than simple resurfacing and includes major repairs and reconstruction in some challenging areas.

“By definition, the nature of this civils work affects residents, motorists, pedestrians, cyclists and businesses and as such our collaboration with all of these stakeholders was critical throughout the process.  The Britcon and Specialist Surfacing teams are extremely well experienced in managing delivery expectation against public interest.”

Britcon has previously completed the £1.2 million installation of a new scheme to ease traffic flows at Swinemoor Lane, one of the busiest highway routes in Beverley, East Yorkshire. It has also completed many highway projects for DVSA with which it maintains a long-term partnership as well as the new state of the art toll collection facility on the Humber Bridge.

Established for more than 30 years, Britcon is £45 million turnover business headquartered in Scunthorpe and directly employs 110 people on its project sites across the UK.

I'm the Assistant Editor on BMJ. If you have any product or people information, or some news you'd like to share, please feel free to email me.
Previous Sugar House Island developer Vastint joins Considerate Constructors Scheme
Next IoD boss to speak at BMF All Industry Conference