Sympathetic locally-sourced materials, technical expertise and market-leading guarantees led Vale of Glamorgan Council to choose BMI Redland and BMI Icopal materials when re-roofing an early 20th century primary school. “We chose BMI because it could offer us 15-year guarantees on the products; the roof slate was made from locally-sourced materials and because the pitched and flat products could work in conjunction on the details,” says Paul Hynam, Consultant Building Surveyor to the project.

Built in 1905, Cogan Primary School suffered from a roof that continually leaked despite being patched with various types of slate ov 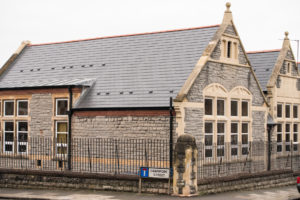 er the years. The roof’s deterioration was accelerated by thieves stripping lead flashings and it had the complexity of there being a 100m2 flat roof right in the centre of the school.

“The interface between pitched and flat roof can sometimes cause an issue, so it was a concern. If you have two companies responsible for each, then one can blame the other for any faults,” Hynam explains.

“We’d worked with BMI before using its SpecMaster service for pitched roofs and knew that it would oversee the job closely. However, as BMI supply both pitched and flat roofing solutions, we also knew that we could rely on them for all parts of the roof and they would make sure that the detailing between the two roofing systems was sufficiently robust.” 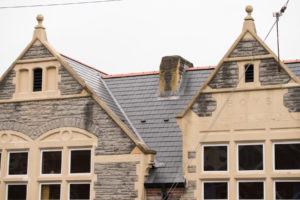 set several challenges for the new roof: it should look like the existing roof, not require any maintenance, and should be sourced locally to reduce the carbon footprint and its environmental impact. It also needed to be installed quickly to reduced health and safety issues and completed during the school holidays, avoiding risk to the school’s pupils.

To reduce the risk of theft, the council also wanted to use a lead alternative and needed a secure interface between the flat and pitched roofs.

For the pitched roof the solution was BMI Redland Cambrian Slate, an interlocking slate manufactured from recycled waste slate in nearby Merthyr Tydfil, a dry-fix system to cut down maintenance, and fixings on the ridge and hip system to mimic the previous roof.

Some of the details on the side abutments were leaking because there was only a secret gutter rather than a cover flashing, so cover flashings made from a lead alternative were installed under the coping, a difficult task because the coping stones were very large.

In addition, standard eaves vents could not be used because there was lath, plaster, and tar between the rafters at eaves level. Installing eaves vents would have damaged the vaulted ceiling, so vent tiles were used for venting instead.

Where robust details were needed, the BMI specified  specific installation methods, particularly where the pitched roof met the flat roof. BMI’s solution was to carry the waterproofing under the Cambrian Slate and up to the top of the eaves batten. This detail and others were monitored by the Area Technical Manager during installation.

The school’s roof now provides the Vale of Glamorgan Council and school the security and reliability it needs –  with guarantees it can rely on of up to 20 years, quality products specified and installed, a pitched and flat roof that collaborate on the details and locally-sourced materials. Sounds like a winning combination!

I'm the Assistant Editor on BMJ. If you have any product or people information, or some news you'd like to share, please feel free to email me.
Previous Emerys joins H&B group
Next Coastal funding is an opportunity to invest in local business