Under a Government led by Jeremy Hunt MP, there would be a Budget in the first week of September to prepare for the possibility of leaving the EU on a no-deal basis on 31 October, the Foreign Secretary has told the BMF. 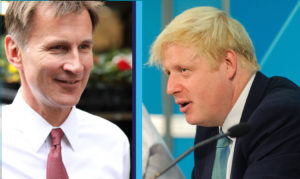 Hunt, alongside his Prime Ministerial rival Boris Johnson MP, was speaking at the last of the Conservative Party Leadership Electionhustings at the ExCel in London’s Docklands in front of party members, business representatives and diplomatic observers. Brett Amphlett, Policy and Public Affairs’ Manager, represented the BMF at this event to learn how their ideas would affect the building materials’ supply chain.

Hunt said he would cut business taxes to stimulate investment and boost the economy – including his promises to cut Corporation Tax to 12.5%, take 90% of high street businesses out of business rates, and increase the Annual Investment Allowance to £5 million.

Johnson drew on his time as Mayor of London, pointing to his record on new-build housing in the capital. He also spoke about environmental policy and ‘green collar’ jobs. Johnson praised the current Prime Minister, Theresa May MP, for legislating for the new committment to end the UK’s contribution to global warming with a net zero emissions’ target by year 2050. The revolutionary technological advances being made in Britain enables us to take the lead on climate change, he added.

He reminded the London audience of his scheme to replace and improve boilers in the capital. This was a reference to his London Boiler Cashback Scheme in 2016-2017 that encouraged Londoners to replace old, inefficient boilers with modern, energy-efficient models. The BMF was involved in devising that offer with City Hall staff and other heating industry partners to decide on eligibility criteria and bring it to wider attention.

Both contenders spoke of the need to go further on cutting greenhouse gas emissions and the way that young people have been at the forefront of recent public protests against global warming.

Where’s the magic money tree, then?

The recovery in the repair, maintenance and improvement sector has helped Travis Perkins to half-year …