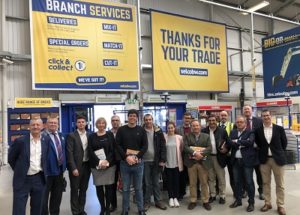 The Builders Merchants Federation (BMF) led a fact-finding visit for its counterpart trade bodies in Belgium, Spain, Portugal and several merchants from the Iberian peninsula as part of an initiative to promote wider understanding and best practice between builders merchants across Europe during BMF CEO, John Newcomb’s term as President of UFEMAT, the European Association of National Builders Merchants Associations and Manufacturers.

Delegates were briefed on the UK market during a visit to the BMF’s HQ in Coventry before attending the Roofing Cladding and Insulation (RCI) Show at Ricoh Arena.  The group also visited branches of two merchants, Selco Builders Warehouse, which has 66 trade-only branches across the county, and EH Smith which serves both trade and DIY customers from 12 branches in the midlands and south east.   They were able to hear directly from the branch manager and directors of both operations about the opportunities and challenges faced by UK merchants and the business models they have adopted.

Thanking the BMF for their hospitality, Jaume Rullan, MD of Spanish merchant Bongrup, said: “I would like to express the sincere gratitude we feel for the attention we received during the trip.  We have got to know the BMF very well, which has been of great interest, and have also learnt about a series of companies that has shed some light on how the future may look.”

The BMF has now been invited to speak at the Congress of the National Association of Distributors of Ceramics and Construction Materials in Spain later this year to share best practice with a wider audience of their members.

John Newcomb said: “The building materials supply industry throughout Europe shares many similarities.  We can all benefit from sharing experiences and working together to uncover new and better ways of addressing common concerns. I hope this field trip will be the first of many during my term as President of UFEMAT.”

I'm the Assistant Editor on BMJ. If you have any product or people information, or some news you'd like to share, please feel free to email me.
Previous Travis Perkins Appoints New Managing Director for BSS
Next New Construction Minister must make licensing his mission, says FMB