A gala members’ dinner at the Belfry Hotel, the final celebration marking the Builders Merchants Federation’s (BMF) Anniversary year, raised £6,000 to be shared between Variety, the Children’s Charity – the BMF’s charity of the year – and RAFA, the Royal Air Forces Association charity.  While the BMF has celebrated 40 years as a Federation and 110 years a trade body, the RAF has marked its own centenary throughout 2018. 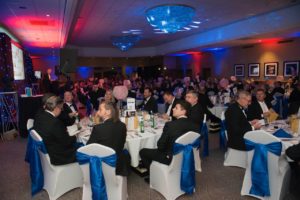 Over 160 people attended the event with multiple generations of merchants represented from Past Presidents, Stuart Somerville, Stuart Mason-Elliott, Barrie Crow and David Gandy, and past and present BMF Board members to members of the BMF Young Merchant Group.

The dinner also provided an opportunity to celebrate another landmark. The BMF’s longest-serving member of staff, John Stephenson, was presented with a special award to mark his retirement in December after 24 years of service.

John Newcomb BMF CEO said: “I would like to thank everyone involved in all three celebrations during our Anniversary year – our first Parliamentary Reception in April, our first Young Merchants’ Conference in October and, of course, this gala Anniversary Dinner, which has raised a fantastic sum for two very worthy charities.  In particular, our thanks go to the 20 Supplier Partners who have worked most closely with the BMF in recent years, helping us to stage these events.

“While it is only right and proper to celebrate our heritage, our focus is firmly rooted in the 21st Century, and our mission to support BMF members to build excellence remains at the heart of everything we do.”

I'm the Assistant Editor on BMJ. If you have any product or people information, or some news you'd like to share, please feel free to email me.
Previous ARMA respond to Housing Secretary’s Cladding Directive
Next TP to sell P&H division