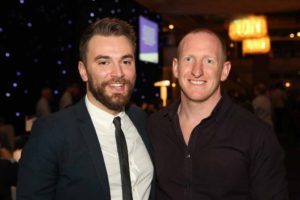 The Builders Merchants Federation will be addressing the important issue of mental health at next year’s BMF All Industry Conference.  Speaking on the main platform on Day One, award-winning mental health campaigners Neil Laybourn and Jonny Benjamin MBE will share their story and offer practical advice on how to work with and overcome mental health issues in the workplace.

Their campaigning work is potentially life-saving. On World Mental Health Day, earlier this month, the Government announced the appointment of a suicide prevention minister – shockingly suicide is the leading cause of death for men under 45, affecting people from every walk of life. In a recent study more than half of those in the construction trade (55%) are said to have experienced mental health issues at some point, while another industry study last year found one in four have considered taking their own life.

Laybourn and Benjamin’s story was featured in a Channel 4 documentary which led to a private meeting with Prince William and the Duchess of Cambridge. Following this they ran the 2017 London Marathon in support of the Heads Together mental health initiative, spearheaded by the royal couple and Prince Harry, which combines a campaign to tackle stigma and change the conversation on mental health with fundraising for a series of innovative new mental health services.

John Newcomb, BMF CEO said: “There is a growing understanding within our industry that mental health is as important as physical health and a number of BMF members, including Chandlers, Haldane Fisher and Travis Perkins are already implementing programmes both to raise awareness amongst staff and customers and to support employees. Neil and Jonny’s presentation is one of the most powerful that I have ever seen and I’m certain that it will resonate with every delegate in the room.”

They will also lead a BMF Industry Forum on Day Two, sponsored by Isover Saint-Gobain, which will further explore a subject that is gradually breaking free of the stigmas that have surrounded it for many years.

David Travill, MD at Isover Saint-Gobain said: “We are extremely pleased to support this important discussion. A generation ago no one spoke about cancer but bringing it out in the open increased funding for research and vastly increased survival rates. Today we are in a similar position with mental health. Talking about it begins the process of putting mental health on an equal footing to physical health, which will ultimately benefit every one of us, and our businesses.”

I'm the Assistant Editor on BMJ. If you have any product or people information, or some news you'd like to share, please feel free to email me.
Previous Dangerous Encounters for the Kent Blaxill Broke.Bike. Mountain Team
Next Ibstock Brick shortlisted for two edie Sustainability Leaders Awards 2019