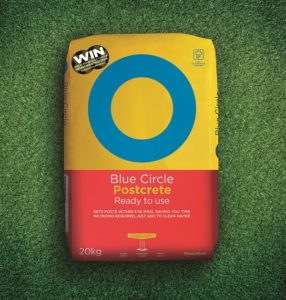 Blue Circle Postcrete’s ground breaking on-pack/in-pack promotion, which offered customers the chance to win premier league tickets, has been revealed as Tarmac Cements’ most successful to date. The promotion, which ran for four months proved popular with customers, receiving over 4,000 entries and totalled 13,000 visits to the dedicated landing page.

The competition provided builders’ merchants and DIY stores across the UK with a unique on-pack/in-pack promotion for their customers, offering them the opportunity to watch their Premier League heroes simply by picking up a bag of Blue Circle Postcrete.

Mike Lomax, Marketing Communications Manager at Tarmac Cement, said: “Being the first ‘Willy Wonka’ style on-pack/in-pack promotion of its kind in the industry, the goal was to create a market leading campaign, which not only increased sales, but resonated amongst merchants and their customers. The promotion is just one example of how Blue Circle products are leading the way with exciting offers designed to help boost merchant and retailer sales.”

The offer, which ran from March 29 to the end of July, was supported by a range of marketing activities including carefully targeted PR and advertising, email campaigns, in-store merchandising and social media activities.

For the promotion, Tarmac produced specially printed packs which included code numbers inside each bag, which, when entered online, offered hundreds of chances to win tickets both instantly and in a weekly prize draw.

Blue Circle Postcrete is a fast-setting, time-saving, ready-to-use product which requires no mixing, enabling the fixing of all types of wood, metal and concrete posts in ten minutes. The product comes in handy 20kg weatherproof, tear resistant bags.

To find out more about Tarmac Blue Circle, visit https://tarmac-bluecircle.co.uk/

I'm the Assistant Editor on BMJ. If you have any product or people information, or some news you'd like to share, please feel free to email me.
Previous Charcon joins the Birmingham Cycle Revolution
Next New Managing Director for Kudos