It’s been an impressive year for staff that have been undertaking extra qualifications, winning awards alongside their devotion to the builders’ merchants industry.

The awards were presented at the prestigious Worshipful Company of Builders’ Merchants’ City and Awards Luncheon in London on March 19th.

This year’s winner of the Galton Medal was Steven Webber, Operations Manager at Elliotts.

There were also three MOL Winners, being the highest achievers in terms of grade, awarded for their MOL modules:

First, Jack Rothwell who works for James Hargreaves, won a tankard and a cheque for £1,000.

Second, Lynn McGhee who works for Ridgeons, was last year’s first-prize winner, won goblet and a cheque for £500.

Third,  Peter Barker.  Peter was unable to attend the awards, so his prize of a tankard and a cheque for £300 will be sent to him at West Building Supplies.

Rothwell, a graduate trainee with James Hargreaves Plumbing Depot and grandson of the company’s founder, finished as top student in the latest Manchester Open Learning (MOL) modules run in conjunction with the Worshipful Company of Builders’ Merchants (WCBM).

He scored a number of distinctions and beat off competition from hundreds of fellow students to pick up a £1,000 cheque and special tankard at WCBM’s annual city and awards presentation luncheon held at Vintners’ Hall in London.

He said: “When the invitation arrived I thought it was just for completing the modules and I didn’t really want to have to take a day off work. My bosses thought otherwise, insisted I should go and what a surprise I got when the results were announced! It turned out that I had scored the most number of points of all the participants from across the country and I just thought, wow, that’s amazing. Mum went along with me and we were both taken aback. It was surreal.”

Sales Director Bill Davies said: “Jack’s a bright lad who has made his family and all of us very proud with this great achievement. He has been rewarded for a lot of hard work and endless hours spent combining work and study. It would seem that the long-term future of James Hargreaves Plumbing Depot lies in very safe hands.”

Ridgeons’ St Ives Branch Manager, Lynn McGhee, was recognised for her excellent grades achieved while studying for a City & Guilds accredited professional qualification.
The Sheriff of London, Neil Redcliffe, presented McGhee with her award at the Awards Luncheon , after completing her second year on the Manchester Online Learning (MOL) diploma in Building & Timber in January. 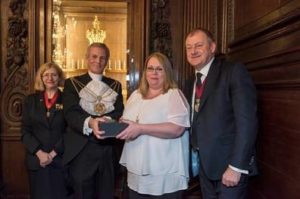 ding marks for her first year. Ridgeons funded her course, making her the first company colleague to secure the qualification.

She said: “It was an honour to attend the Worshipful Company of Builders Merchants City and Awards luncheon again this year, and to be recognised for my hard work for two years running. I would like to say a special thanks to Ridgeons for all of their support and indeed for my ongoing professional development. I am enjoying applying my knowledge in my job, which is helping to enhance our branch’s expertise and customer service.”

There was also the BMF campus winner who is Alun Thomas who works for LBS Builders Merchants (Aberdare). He attained the highest score in 2017, completing 52 modules with an average passing score of 87% and was awarded a tankard and cheque for £500.

I'm the Assistant Editor on BMJ. If you have any product or people information, or some news you'd like to share, please feel free to email me.
Previous Ridgeons branch donates two wheelbarrows of Easter eggs to local children’s hospice
Next Warning signs for construction as output drops, says FMB