April sales for merchants hold up

Total sales through general builders’ merchants rose by 8.8% in April compared with the same period a year earlier, according to the Builders Merchant Building Index.  last year.

The month was helped by two extra trading days and an earlier Easter. Overall, six categories did better than the previous year, with Plumbing Heating & Electrical gaining 22.5%, followed by Workwear & Safetywear (+17.7%), Kitchens & Bathrooms (+12.7%) and Timber & Joinery Products (+12.6%). Heavy Building Materials, the largest category, was just off the pace (+8.4%) and only Landscaping sold less (-4.3%).

Average sales per day, which take trading day differences into account, were down 2.1% on April 2017.

Overall, sales in April 2018l were 3.5% higher than in March 2018, despite April having one less trading day. However March was affected by extremely bad weather and included Good Friday this year, both of which held back turnover. Seasonal category, Landscaping (+26.0%) saw the biggest month-on-month increase, followed by Heavy Building Materials (+4.7%).

Average sales a day in April were 8.7% higher than March. 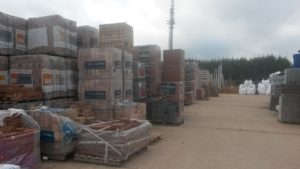