Apprentices Make their Mark at Flamco 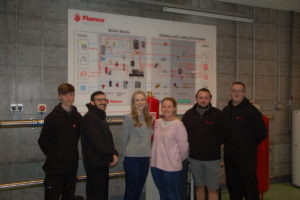 There’s a company that’s showing just how important apprentices can be in providing new injections of enthusiasm and knowledge in the HVAC industry.

The Flamco Group is a member of Aalberts Industries N.V. and operates in the development, production and sale of high-quality components for use in heating, ventilation and air conditioning systems. It has business in more than 70 countries across the world and offers successful, innovative solutions for residential and commercial buildings and sustainable energy.

Flamco UK is a large employer in the St Helen’s area of Merseyside and has been operating its own successful apprenticeship scheme since 2009. Since then, the company has regularly recruited new apprentices and has seen several of those stay with the business after completing their apprenticeships, moving on to undertake vital roles within the business.

HR Manager Janice Sanderson says the Apprenticeship Scheme has been an undoubted success over the past nine years: “We approached St Helen’s College back in 2009 and our first apprentice joined us later that year. We have since regularly recruited apprentices, in engineering, production, warehousing and customer service roles and we’re convinced as a business that apprentices are an important part of what we do, bringing in new blood to the company and seeing the company putting something back into the local community.”

The Flamco apprenticeship scheme really took off in 2011 when with the help of St Helen’s College, Flamco ran an Apprenticeship Open Day. As a result, the company recruited five new apprentices that joined the company and worked through their apprenticeships alongside Flamco’s full time staff. And it hasn’t looked back.

“Here at Flamco we believe that taking on apprentices illustrates our commitment to growing the business, and our commitment to training which is key to our success,” says Flamco Managing Director, UK, Ireland, Middle East and America, Koert Munnik. “Apprentices bring with them a range of benefits to a company, through their support and assistance of senior members of staff and they participate in the business from ‘day1’ of joining us. They attend college for a day every week to gain additional skills, but for four days of the week they are very much part of our team and helping us to thrive.”

Flamco currently has a number of apprentices that have completed their apprenticeships and have continued into further education and secured a position within Flamco here in the UK.

Amongst them is Daniel Wilson who is now Flamco’s Financial Accountant. He started with Flamco in 2012 as an apprentice accounts assistant and he’s now well into his Chartered Institute of Management Accountants qualifications and as Financial Accountant, has two members of staff reporting to him.

“We’re very proud of them and we have recently taken on a further five apprentices – two in the warehouse, two production apprentices and another accounts apprentice who is already working towards his AAT qualification,” says Janice Sanderson. “It’s a policy that is paying dividends and something we intend to continue in the years ahead.”

I'm the Assistant Editor on BMJ. If you have any product or people information, or some news you'd like to share, please feel free to email me.
Previous Aspex launches new flush skirting system
Next Modular Perfection from Hudson Reed