Andy Whitney joined Kent Blaxill in 1978 and is one of a rare breed who have chosen to give his entire working career to a company for which Kent Blaxill is very grateful.

Whilst old enough to have started in a ‘brown coat,’ Whitney’s passion has always been sales.  From a salesman in the Colchester area, he’s held a variety of management roles selling building and decorative materials. As decorative sales manager, Whitney now spearheads the growth of Kent Blaxill’s decorative paint business, with 9 new branches opened since 2014, taking the current total to 16. 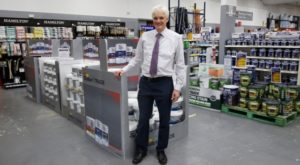 His wide knowledge is highly-respected in the trade paint business alongside his amiability and that he always does what he says he is going to do. Simon Blaxill, Managing Director said, ‘While the latter may seem an obvious trait for a salesperson, Andy goes above and beyond in ways that most others do not, to the extent that many customers consider Andy to be a friend. Colleagues know that he would always do himself what he asks of his team.’

Kent Blaxill has benefitted not only from Whitney’s contribution at work but also from his organisation of social events such as company walks. He has a keen interest in outdoor life and National Trust properties which he uses to regularly produce photographs for the Kent Blaxill annual calendar that remains a popular feature with Kent Blaxill customers.  An enthusiastic owner of a camper van, he is also known to enjoy a bottle of good red wine!

A presentation to mark his 40 years was made by Simon Blaxill with colleagues at the Colchester head office earlier this month.

I'm the Assistant Editor on BMJ. If you have any product or people information, or some news you'd like to share, please feel free to email me.
Previous EFT Consult launches Circular Economy Club in Swansea
Next Hunt is on for Oxfordshire’s Painter and Decorator of the Year