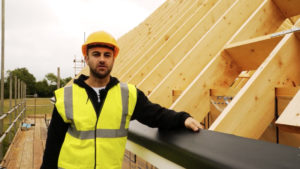 A massive decline in the number of homes built for social rent over the past decade, revealed in a government report this week, could be addressed in part by increasing focus on quicker-to-build offsite homes.

That’s the message from offsite construction flag waver, insulation specialist Actis, which is on a mission to share the benefits of the speedier construction method over more ponderous alternatives.

Figures released by the Ministry for Housing, Communities and Local Government show just 6,463 homes were built in England for social rent in 2017-18, down from almost 30,000 a decade ago.

In England, about 1.25 million families were registered on the waiting list for social housing between 2016-17, of whom two-thirds have been waiting for more than a year. On average, an English local authority has more than 3,500 families on its books.

The government recently lifted the council housing borrowing cap, which could enable local authorities to build an additional 15.000 homes a year.

Earlier this year an extra £2 billion was announced to fund 40,000 new homes projects until 2029, with £9 billion of funding promised last year.

With such a massive shortfall to make up, Actis national specification manager Dan Anson-Hart says as many as possible of these much-needed homes should be constructed offsite, both to make the process speedier and to take on board the reality that the construction industry is suffering from a severe skills shortage.

“The lack of social housing is not caused by slow construction methods, but by economic considerations, the opportunity to help make amends can be assisted by building them as speedily as possible – without compromising on quality or thermal efficiency of course,” said Anson-Hart.

“It takes around 30% less time to build a timber frame house than it does to build a standard brick and block one. Much of the work, such as wiring, plumbing and insulation, takes place in the factory – which means weather can’t hamper the build process. And added to that our insulation system takes between 25 and 50% less time to install than traditional alternatives – which all helps to speed things up.”

I'm the Assistant Editor on BMJ. If you have any product or people information, or some news you'd like to share, please feel free to email me.
Previous Roman scoops NHIC Award
Next New Handleless Design for JP Distribution