The Construction Industry Training Board’s announcement this week that it is ploughing £5 million into helping under-represented people move into the industry has been welcomed by insulation specialist Actis.

The CITB’s Pathways into Construction fund will help building firms train ‘hard to reach’ candidates in a bid to address the skills shortage, 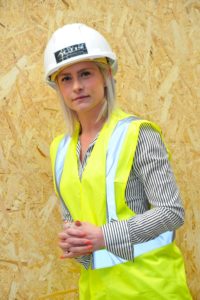 which is likely become more severe after Brexit.

The cash will enable business to take on workers from five key undepresented sectors of society: women, former military personnel, young people not in education or training, the long term unemployed and certain students.

Actis has been a long-term champion of one method of plugging the skills gap – namely increasing the percentage of offsite properties built every year.

Actis regional director Jemma Harris – who ticks two of the five CITB funding categories, being both female and a former naval officer – says the CITB initiative, combined with an increase in offsite construction, will go some way towards addressing the housing crisis.

“Creating a timber frame home is around 30% faster than building in brick and block. Timber frame walls, floors and roofs, complete with electrical wiring, plumbing and insulation are built in factories at relative speed. Indeed, some insulation systems such as Actis Hybrid, which consists of insulation, vapour control layer and breather membrane, can be installed effectively with ease by someone who has had minimal training which can even be delivered via an on line tutorial.

“As these three in one systems are quicker to install than traditional insulation – many builders report savings of 25 to 50% – this in turn also frees up more man hours.”

She says many of the trainees taken on via the CITB programme could learn some of the  ‘easier’ construction skills required to construct off site homes, enabling those with a longer construction pedigree to address the more complex aspects.

I'm the Assistant Editor on BMJ. If you have any product or people information, or some news you'd like to share, please feel free to email me.
Previous Sporting Boost For Swansea Hospice
Next Builders back the high street, says FMB