Actis has produced a series of bite sized video tutorials to accompany the launch of its latest product – an easy-to-use insulating breather membrane for roofs.

The videos, presented by specification manager Dan Anson-Hart, take an overview of how to insulate a pitched roof with its new Boost R Hybrid Roof. They also look in detail about how to create vertical and horizontal joints with the product and how to join it at the eaves.

The four videos are the latest in an extremely popular and helpful series to be produced by Actis and presented by Dan.

He previously made a number of how to guides showing how to use innovative honeycomb insulation Hybris panels in timber frame walls and pitched roofs. They also looked at how to cut the product, how to insert pipes and ducting through the material and how to install it behind timbers.

All Actis Hybrid quick, clean and easy to install products are becoming increasingly popular, with year on year sales on the rise – because installers find them so straightforward to use and because they are excellent thermal blankets.  They can eliminate thermal bridging and thus increase energy efficiency because they wrap round corners and squash into gaps – meaning there is no space through which air can seep. 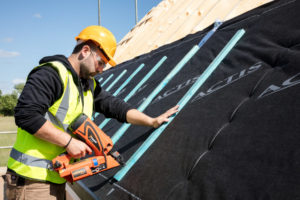 explained: “The videos we have produced so far have had thousands upon thousands  of views. They are really handy go to guides which installers can watch on their phone or tablet when they’re on site.”

CE marked Boost’R Hybrid Roof, which has LABC and LABSS registered details and is NHBC, LABC warranty and Premier Guarantee approved, is an evolution of Actis’ popular Boost’R Hybrid and is aimed at the new build and refurb markets.

The two changes which will make most difference to the user experience are the addition of a lap and the inclusion of built in adhesive tape.

The Boost R Hybrid products also have the highest thermal resistance of any insulating breather membrane on the market and are extremely cost competitive.

* (caption) Actis has produced a series of how to video tutorials to accompany the launch of its easy-to-use Boost’R Hybrid Roof insulating breather membrane.

I'm the Assistant Editor on BMJ. If you have any product or people information, or some news you'd like to share, please feel free to email me.
Previous P C Henderson attends ‘DIY SOS Big Reveal’
Next Stephen Betteridge celebrates half a century at Red Bank