The NHBC’s call this week for a drastic shift towards building more offsite homes in order to reach government housing targets has been welcomed by insulation specialist Actis.

The rallying cry follows the release of this quarter’s new build statistics by the NHBC – which says that the harsh winter weather has made a bad situation even worse.

The number of new builds registered by the NHBC in the first three months of the year fell by 14% compared with the same period last year – and annual figures have fallen by 2%.

And while the ‘Beast from the East’ was responsible for losing around a month of construction time, NHBC chief executive Steve Wood says even without the wintry spell, figures would be way below what is required.

He said an additional 25,000 bricklayers would be needed to reach the government target if using traditional construction methods, but that rapidly embracing new methods of construction would help make up for the lack of skilled tradespeople.

Offsite construction has long been championed by pan European insulation specialist Actis as a way to address the housing shortage.

Actis national specification manager Dan Anson-Hart said: “With such an extreme shortfall in the number of skilled tradespeople such as bricklayers it is clear modern methods of construction need to be actively pursued. Building a timber frame house is around 30% faster than brick and block. Walls, floors and roofs, complete with electrical wiring, plumbing and insulation are all put together in factories, with the on site build element typically taking just seven to 12 days, depending on the size of house.” 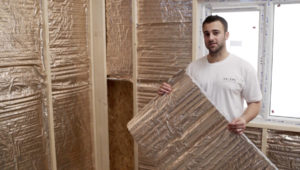 The Actis Hybrid system – which consists of insulation, vapour control layer and breather membrane  – is proving increasingly popular with offsre manufacturers. As well as being quick, clean and easy to use it can be installed effectively with ease by someone who has had minimal training which can even be delivered via an on line tutorial. With builders claiming time savings of between 25 and 50% this can have a big impact on the speed at which homes can be constructed – at a time when there are so few people available to build them.

“While offsite has until recently been the preserve of smaller, more specialist operators, it is gradually becoming more mainstream and being adopted by some of the big name brands. This latest report from the NHBC will perhaps see more of the major operators deciding that diversifying in this direction is the only way to go,” added Anson-Hart.

I'm the Assistant Editor on BMJ. If you have any product or people information, or some news you'd like to share, please feel free to email me.
Previous IronmongeryDirect extends Sunday ordering hours
Next Grant UK expands Spares Operation