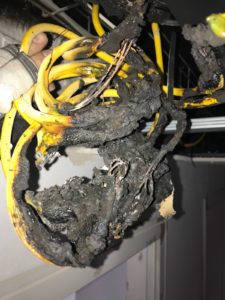 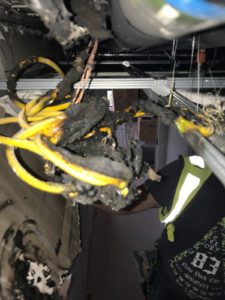 The Approved Cables Initiative (ACI) is advising contractors and distributors to check their cable choices carefully following the discovery of significant quantities of substandard arctic grade flex this year.

Early December has seen a continuation of the problem with suspected substandard arctic grade flex found on a central London installation where the cable caught fire (see images). The ACI is renewing its call for a sample* of suspect cable to be sent to it for testing as soon as it is discovered.

Market surveillance during 2018 detected failures on numerous examples of arctic grade flexibles including pre-assembled industrial hook-up leads. These samples were purchased from a variety of sources including electrical wholesalers, DIY stores, online retailers and eBay stores.

Major concerns arose when ordinary duty flexibles (designed for indoor use to +5°C) were discovered coloured yellow, in what could be interpreted as a deliberate attempt to pass the cable off as an arctic grade flexible (designed for use at sub-zero temperatures and tested down to -40°C).

The pre-assembled yellow leads, sold as industrial extension leads designed for use in harsh environments, incorporated cable clearly marked as H05VV-F (ordinary duty flexible). When subjective to the cold bend test as an arctic grade flexible the cable failed to maintain its integrity; the sheath split open and insulation cracked, subsequently exposing what would be live copper conductors.

Arctic grade cable, which is predominantly yellow or blue in colour, is often used on construction sites and by caravan and motorhome owners to provide temporary outdoor power supplies and in some indoor applications such as cold stores.

Whilst it is normal to have different colours of H05VV-F flexibles (such as white, black, orange and gold), yellow and blue are commonly associated with arctic grade flex and these substandard products could lead end-users to use cable unsuitable for their intended purpose.

Suppliers and end users, who need cable suitable for outdoor use in the cold, should look for the cable marking ‘BS 6004’ and the UK cable code for arctic grade cable, such as ‘3183A’.  Cables marked with ‘H05VV-F’ are not intended to be suitable for such use.

Independent testing by ACI of arctic grade flex has shown cables exhibiting poor conductor resistance with sheathing and cable insulation disintegrating when subjected to a cold bend test. This problem could result in a fire, short circuit or an electric shock.

Peter Smeeth of the Approved Cables Initiative said: “The harsh environment in which these cables should operate means they need to be able to withstand forceful treatment and contractors need to know their cable choice is safe and suitable for its application. The ACI has campaigned throughout the year on this issue and last month we launched an infographic to help understanding.

“The ACI continues to monitor the market place but we need distributors and contractors to check their stocks and ensure their cables comply. They should look for cable markings and third-party independent approval of all purchases. If they are in any doubt, they should contact us immediately.”

The ACI’s Flexible Cord Infographic can be downloaded from the ACI’s website. For further advice email info@aci.org.uk or visit www.aci.org.uk

I'm the Assistant Editor on BMJ. If you have any product or people information, or some news you'd like to share, please feel free to email me.
Previous Kent Blaxill sells Global Stone
Next Fletcher Building announces sale of Formica Group to Broadview

One year on from Carillion’s collapse, Unite warns of Government inaction