Birmingham City Council’s vision for its Cycle Revolution is to make cycling an everyday way to travel by improving road safety and cycling conditions, with 10% of all trips in the city to be made by bike by 2033 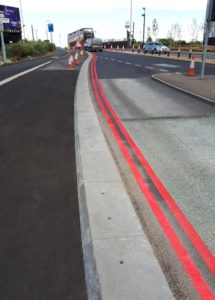 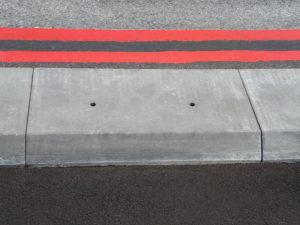 . The initiative includes creating high quality cycle routes on two key roads into Birmingham: the A34 and A38.

Amey, the company delivering the cycling infrastructure improvements in partnership with Birmingham City Council, have installed 299l/m of Charcon’s innovative Cycleway Segregation Unit to create the first section of a 4km, two-way, fully segregated route which shields cyclists from passing traffic, even when on the blind side of a lorry or bus.

The standard, high-performance segregation unit has been used for the majority of this section. And whilst it delivers visually, a new kerb featuring the aesthetics of granite was created especially for certain conservation areas which demanded enhanced visual appeal.

The bespoke design features a bull-nose edge running along the carriageway, capable of withstanding vehicular impact, while a full batter profile on the cycleway side significantly reduces the chance of cyclists catching a pedal.

A frog in the base of the unit improves the key into the bedding material, facilitating a swift installation as the units can simply be dropped into place – an attractive design feature for contractors under pressure to minimise impact to traffic, residents and businesses while works are ongoing.

Mark Barter, Sales Director for Charcon, comments: “Due to the high traffic volumes coming into Birmingham city centre each day, the A34 could only close for four days to install the segregation unit. Having experience of delivering this type of product on a large scale before, we were able to confidently hit the ground running and ensure phase one of the project was delivered on time and within budget.”

Due to the swift delivery and installation of phase one, a further 656l/m of Charcon’s Cycleway Segregation Unit has been specified for phase two of the project.

Chris Harris, Project Manager for Amey comments: The sales team at Charcon have been very supportive, ensuring all units are delivered to site on time. This has helped us keep to our strict programme, reducing disruption to the people of Birmingham as we deliver a high-quality and sustainable cycle route for the city.”

With Birmingham ranked as the third most populated urban area in the United Kingdom, its 1.26 million residents are on a daily basis exposed to the detrimental effects of traffic congestion and man-made air pollution. Despite this, the city holds its position as the top UK regional city for quality of life, with initiatives such as Birmingham Cycle Revolution specifically engineered to make the city healthier, greener, safer and less congested.

Mark Barter adds: “The trend for cycling has increased significantly in the UK and, as a result, the number of cycle-related incidents on our roads has also increased with fatalities in London reaching 33 at its peak. Since our segregation system was installed for London’s Cycle Super Highway (CS2), the number of accidents has been reduced and we look forward to seeing a similar result in Birmingham.”

For further information, visit charcon.com or contact the team via 01335 372 222 or landscaping@aggregate.com.

I'm the Assistant Editor on BMJ. If you have any product or people information, or some news you'd like to share, please feel free to email me.
Previous Key Scottish appointment for BeA off-site sales team
Next Blue Circle on-pack promotion scores a winner Elliotts to Cycle Across France for Local Children’s Hospice