The Government is to consult on the possible prohibition of combustible cladding systems being used on high-rise buildings like the Grenfell Tower, housing minister James Brokenshire has announced.

His statement to Parliament is despite the official review of building regulations, led by Dame Judith Hackitt, not recommending such a ban.

Brokenshire said: “Having listened carefully to concerns, the government will consult on banning the use of combustible materials in cladding systems on high-rise residential buildings. The cladding believed to be on Grenfell Tower was unlawful under existing building regulations. It should not have been used. But I will ensure there is no room for doubt over what materials can be used safely in cladding of high-rise residential buildings.”

The cladding used on Grenfell was aluminium composite material sheets with a polyethylene core. It had a ’Class 0’ rating for fire resistance.

The government is already consulting on a possible ban on desktop studies, a controversial means of using untested combustible cladding on tower blocks.

He confirmed that a clarified version of the building regulations fire safety guidance will be released in July. 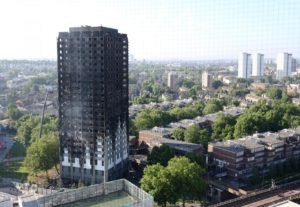