D.W. Nye’s Proud to be Local campaign was set up to support worthy causes, charities and groups in the local area. The builders’ merchant has already donated £1500 to three other community groups this year.

2nd Horsham Scout Group, which will be presented with £500, joined 4TheYouth, Holbrook Animal Rescue and Jack & Jill Pre-School – all based in Horsham – as the fourth and final winner of 2018.

“2nd Horsham Scout Group are excited to hear about the £500 from D.W.Nye ‘Proud To Be Local’ campaign. This will be a big boost to our fu 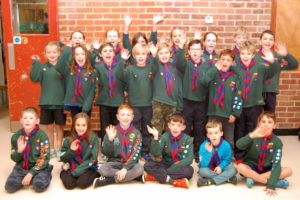 ndraising for improvements to our scout hut, where over 100 local girls and boys learn our ‘Skills for Life’ strategy. The 2nd Horsham Scout Hut is also home to a nursery, karate club, Brownies, Rainbows and other groups – so it is a real community space which will benefit from this win. Thank you to D.W.Nye.”

“Huge congratulations to the 2nd Horsham Scout Group. It has been an absolute pleasure to help so many deserving charities and groups during 2018 and I hope the funding makes a big difference to the important work they do for the community. We are looking forward to supporting more worthy causes in 2019.”

D.W. Nye’s Proud to be Local campaign will give away £500 to a further four local causes in 2019 and is now open for nominations. Nominations should be emailed to proudtobelocal@dwnye.co.uk before 31st January 2019.

I'm the Assistant Editor on BMJ. If you have any product or people information, or some news you'd like to share, please feel free to email me.
Previous British Steel manufacturer celebrates centenary
Next Covers to continue sponsorship of Alresford Rugby Club