2018 Apprentice Decorator of the Year is Crowned

Aiden Dearie has been chosen as the ‘gold’ winner of the 2018 Crown Paints Apprentice Decorator of the Year competition after a gruelling three-day challenge at the WorldSkills UK LIVE event at Birmingham’s NEC.

The final pitted seven regional winners against each other as they undertook a timed challenge: completing a design which commemorated the 100 year anniversary of the signing of the Armistice Agreement, marking the end of the First World War. The artwork was devised by Crown’s in-house design studio specially for the competition. 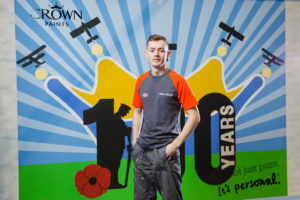 During the final, each apprentice had 18 hours in total to complete the challenge under the watchful eye of the competition’s panel of judges, including Kevin O’Donnell, Crown Paints’ training manager, Sandie Webster and Ben Deer, both former Crown Paints Apprentice Decorator of the Year winners.

Dearie, a 22-year-old apprentice who is completing his SVQ Level 3 Painting and Decorating at City Building Glasgow’s Queenslie Training College demonstrated excellent attention to detail. The judges praised his skill with both matt paint and trim work, and for completing the design well within the timeframe to an exceptionally high standard. He also scored highly in terms of his accuracy and finesse, and for his tidy working area.

The annual competition, which is now in its 39th year, is organised by the Construction Industry Training Board (CITB) and sponsored by Crown Paints along with other industry leaders such as British Gypsum.

Ben Deer, assistant judge and former Crown Paints Apprentice Decorator of the Year winner, said: “The standard of this year’s competition was incredibly high, which made selecting a winner a challenge in itself. Aiden stood out for his consistency throughout the three days of the competition, and for his tidy and accurate work which achieved a beautiful finish.

“Every decorator is different, and it’s fascinating to see how each person approaches the challenge we set. This year, we slightly reduced the time available to complete the challenge, but the majority of the finalists – Aiden included – managed their time and workload very well, and everyone should be very proud of their work.”

Dearie said: “It means a lot to me to win the Apprentice Decorator of the Year competition, as it shows that all my hard work has paid off. I love the variety of decorating, and the competition final gave me a platform to showcase some of the skills I’ve perfected as part of my apprenticeship – and it’s proof that if you put in the hours and work hard, you’ll be rewarded.”

This year’s silver medallist was 19-year-old Thomas Nowell of Truro and Penwith College, while 19-year-old Bridie Kilby of Leicester College took the bronze.

The final was held as part of the SkillBuild event, organised by CITB as part of WorldSkills UK LIVE, at Birmingham’s NEC over three days from 15th to 17th November. It is the largest multi-trade competition in the UK for construction trainees and apprentices and covers a range of skills and sectors from bricklaying and cabinet making to plastering and stonemasonry.

I'm the Assistant Editor on BMJ. If you have any product or people information, or some news you'd like to share, please feel free to email me.
Previous Actis presents trophies to two LABC Building Excellence award winners
Next A modern twist to a classic sink